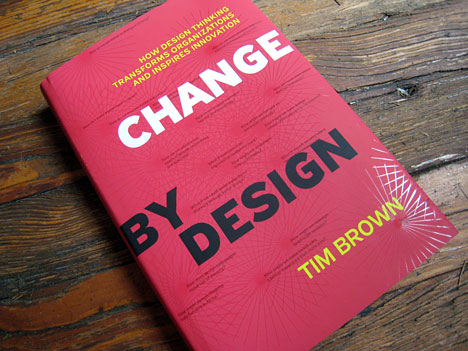 About halfway through Change by Design: How Design Thinking Transforms Organizations and Inspires Innovation, Tim Brown repeats Tom Peter's much cited comment that "the MFA is the new MBA." In doing so, however, he doesn't fully endorse the sentiment. Instead Brown observes that the dynamic skills required in business share as much in common with the creativity required for a design practice as they do with the critical thinking required for the MBA. On the back of the book jacket the author observes, "this is not a book by designers for designers, this is a book for creative leaders who seek to infuse design thinking into every level of an organization." In that way it straddles the gulf between the MFA and the MBA. Clearly learning to draw is a far sight from learning how to run a discounted cash flow analysis and the skill set doesn't overlap. We need both MFAs and MBAs. But the crux of what Brown is getting at is what McKinsey & Company referred to as the "T-Shaped" person, where the vertical axis represents the depth of the skill set that forms their core competency. Valuable design thinkers, however, "cross the T," holding not only deep familiarity with their core role, but also a disposition for collaboration across enterprises. A "design thinker" isn't just an artist and isn't just a number-cruncher. Instead they need to be knowledgeable enough about each to be conversant: to be a member not of a multidisciplinary team but of an interdisciplinary team.

If this all sounds a little like business-jargon-tinged self-help ... well, it is. Business books tend to be written in a peculiar dialect somewhere between anecdote and allegory, and Change by Design is no exception. Perhaps owing to the Harvard Business School case method, it seems de rigeur in business books these days to present lessons as anecdotes about business interactions (e.g. Shimano's core business of bicycle sprockets and derailleurs was flattening) followed an analysis of the market and the causes of said shift. At the "B-School" the initial case would be followed by rigorous debate and a written analysis of what the company should do to change its position. In Change by Design, the reader learns what solutions IDEO reached (e.g. returning to the comfort and familiarity of coasting bikes from childhood). Regardless of the success of that coasting initiative, however, the real lesson is in the allegory as Brown provides that proves the centerpiece of the book: "The reason for the iterative, nonlinear nature of the journey is not that design thinkers are disorganized or undisciplined but that design thinking is an exploratory process; done right, it will inevitably make unexpected discoveries along the way, and it would be foolish not to find out where they lead." Reading that, then, perhaps industrial designers should be thrilled; the processes that we learned for "needsfinding" and "directed research" truly are akin to the case method. Perhaps that's what Peters was getting at after all.

But if Tim Brown was right, and this isn't a book "by designers for designers," what can we get out of it? The rigorous analytic thinking that MBAs learn in finance classes isn't presented here. Instead we see the softer/touchier side of "inspiration, ideation, implementation" of which long-time prototypers and experimenters should already be aware. IDEO, however, has managed to out-business corporate America through design, so perhaps there's something to be learned here. Ultimately, the difference between design and art is commerce and function, so most designers will eventually need to reach out or at least speak to corporate America. Through his years as CEO of IDEO, Brown knows as well as anyone how to communicate with suits ... even if he has an MFA. Consequently, while we (designers) may not be the target audience for the book, there is certainly something to be learned here for us to "cross the T" and speak to MBAs.

The early portion of the book struggles with the stifling realities of the corporate American workplace, even unintentionally demonstrating how binding cubicle life can be. Upon learning that a company like Mattel needed to create a "retreat" so that cross disciplinary employees can have a "fun" space in which to collaborate, this reader wondered couldn't help but wonder if it was that hard to have fun at a toy company, the rest of corporate America must be in trouble. Clearly the MFA is more fun than the MBA, but the MBA drives the world, ... and the economy. Perhaps there's something horribly ill about corporate America and that's what Brown is getting at. Either way, many of the case studies, even in their success, should serve as cautionary tales about the nature of corporate structure. Those of us who get our hands dirty, either with actual dirt and grease or with hot glue and Chartpak markers should be happy.

In the second half of the book called "Design Thinking Meets the Corporation," Brown begins to tackle enormous, near-insurmountable problems. From treating Procter & Gamble's ability to help housewives better clean their bathrooms in the early chapters, he lurches into the "big issues." A short story illustrating Oral-B's successful product launch of a toothbrush designed for the small and awkward hands of children, suddenly turns into an environmental parable when the lead designer of the toothbrush found one washed up on a beach in Mexico largely intact. Although not discussed in detail in the book, IDEO has shifted focus in recent years to pay more attention to global human problems, and that's a good thing. In the early pages, Brown talks about how important it is to have a well structured design brief in order to better frame the problem. In the latter pages, he even tackles the United Nations' Millennium Development Goals like "Eradicating extreme poverty." After a short admission that statement is too broad to form an effective design brief, he reframes it immediately as a series of more specific initiatives like: "How might we enable poor farmers to increase the productivity of their land through simple, low-cost products and services?" These are not simple questions, but as Charles Eames responded, when asked how whether he came up with his lounge chair in a flash of insight, replied yes, "a kind of 30-year flash." With people like Brown codifying design thinking, the tools are out there to solve our problems if a few people are willing to attack them with that sort of tenacity.