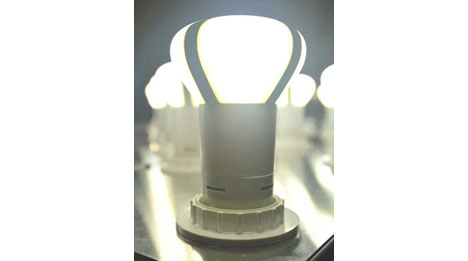 The trend of using competition to spur innovation continues. Along the lines of the X-prize, the U.S. Government is intervening in the role lightbulbs play in carbon emissions by sponsoring the L-prize, "the first government-sponsored technology competition designed to spur lighting manufacturers to develop high-quality, high-efficiency solid-state lighting products to replace the common light bulb."

This is no pie-in-the-sky contest--they're looking for an affordable bulb that consumers will actually buy, something that will fit in a regular socket, use less than 10 watts to produce the light of a 60 watt incandescent, last 25,000 hours or more, and give off a normal, warm light that doesn't make you want to throw up.

Philips has submitted the first entry, shown above, and submitted 2,000 of them to the Department of Energy for testing. If they win they'll get US $10 million and more importantly, a fat contract to light the halls of U.S. Government buildings.

By setting the L Prize's criteria, "we've probably eliminated almost 25 products that were horrible," [said James Brodrick, manager of the Department of Energyâ€™s Solid State Lighting Program.] "We test LED bulbs today that claim on the package that they're equivalent to 40 watts, but are really like 20 watt bulbs."

Before you plan on replacing your lighting with new LED lamps, know that the first products won't be cheap. Today's LED-based lamps cost up to $100 each. To get the cost down, Mr. Brodrick has enlisted 27 utility companies around the country as L Prize partners. Once a winner is chosen, the utilities will help promote and possibly subsidize the cost of the lamp.

It's in the utilities' interests to do so, both for P.R. reasons and because if enough people buy LED lamps, there will be less demand for power and for new power plants. In several states, such as California, profits are "decoupled" from consumption. Profits are made based on a fair rate of return, and energy rates are adjusted to meet that level.

How much the new bulbs will eventually cost is anybody's guess, but clearly there's no market if they're too expensive. "Over the long term, we can absolutely get the cost down to the $20-25 range," [said Kevin Dowling, vice president of innovation at Philips Solid State Lighting Solutions.]