New Dyson invention intended to blow your hair back

Dyson's new invention is out, and it's the opposite of Wesley Snipes: Instead of being a Blade with no fans, it's a fan with no blades.

It's difficult to get a sense of scale from the photo--the first shot I saw made it look like something Sherlock Holmes carries in his pocket--but the device comes in 10" and 12" diameters. It also looks kind of like some interdimensional portal, like if you threw your cat through it, she would not come out the other side and would wind up in a different dimension.

Now, how does the darn thing work?

...The Dyson Air Multiplier Fan [has] no blades, but instead uses a unique technology to multiply air 15 times, expelling 118 gallons of smooth and uninterrupted air every second. 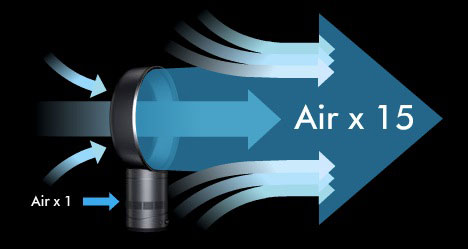 Air is drawn into the base of the machine. The air is forced up into the loop amplifier and accelerated through the annular aperture, creating a jet of air that hugs the airfoil-shaped ramp. While exiting the loop amplifier, the jet pulls air from behind the fan into the airflow. At the same time, the surrounding air from the front and sides of the machine are forced into the air stream, amplifying it 15 times. The result is a constant uninterrupted flow of cooling air.

The Dyson Air Multiplier fan is powered by an energy efficient brushless motor and air speed can be precisely adjusted with a dimmer switch. No blades mean no need for a grill and it's safe and simple to clean.

Of course, as is the trend these days, the more minimalist something starts to become, the more expensive it gets. The fan will start at $299, which is cheaper than an interdimensional portal if a little less fun.

New Dyson invention intended to blow your hair back