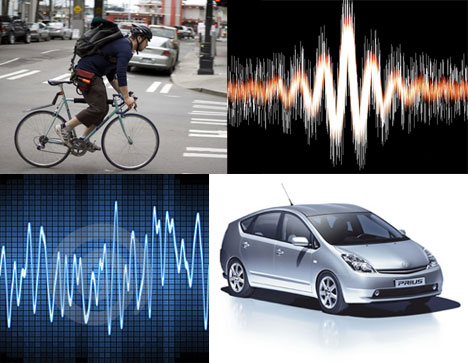 If you live in Manhattan, I guarantee this has happened to you: You check to see that the coast is clear, and start to cross the street. Then you hear this attention-getting noise: Shrill howling, Doppler-effected cursing or the sound of a human voice mimicking a police siren with astonishing accuracy. As you pause, a bike messenger hurtles past you with mere inches to spare.

Urban bike messengers have long known what hybrid car owners are just now discovering: When people can't hear your moving vehicle, they have a tendency to step in front of you, creating a potentially messy physics lesson involving bodies intersecting at vastly different speeds. And so, as an article in the Times points out:

Working with Hollywood special-effects wizards, some hybrid auto companies have started tinkering in sound studios, rather than machine shops, to customize engine noises. The Fisker Karma, an $87,900 plug-in hybrid expected to go on sale next year, will emit a sound -- pumped out of speakers in the bumpers -- that the company founder, Henrik Fisker, describes as "a cross between a starship and a Formula One car."

"One possibility is choosing your own noise," said Nathalie Bauters, a spokeswoman for BMW's Mini division, who added that such technology could be added to one of BMW's electric vehicles in the future.

Yep, make no mistake: One day we'll all be downloading vroom tones that will annoyingly branch out beyond mechanical sounds to include the latest YouTube sound effect or cloying songs that will remain stuck in your head for the rest of the day.

If this comes to pass, I'm going to develop and market a vroom tone of an angry bike messenger screaming "Yo yo yo YO!"

By the by, my favorite screamed bike messenger invective, overheard seconds before slamming into a pedestrian: