The can-don't attitude: Are metal cans not a ridiculously outdated packaging technology? 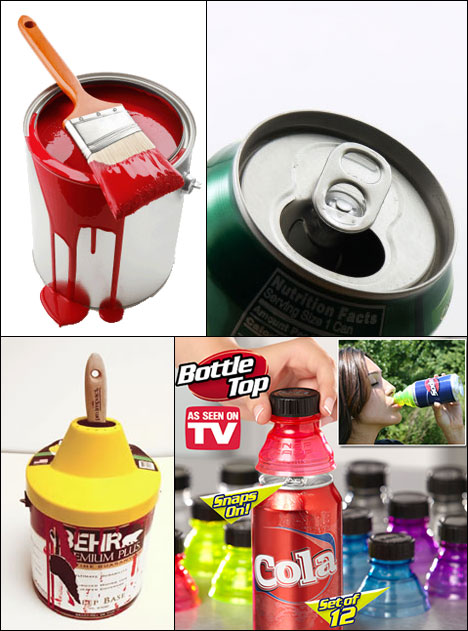 The other day I opened a fresh can of paint with a screwdriver, as I always do, and when I was done with the job (but not through all of the paint) I closed it back up with a hammer, like I always do. But because I wasn't paying attention, I splattered little droplets of paint that had gathered on the lip all over myself during the hammering process.

Sometimes I'll be drinking a can of beer and am interrupted by a phone call requiring me to go somewhere, or sometimes I just don't want to finish a whole can of beer. In those instances, what's left undrank usualy goes down the drain, as an open tallboy of Asahi doesn't last too long in the 'fridge.

What do these things have to do with each other? Just this: Why the hell do we still package things in cans? Opening something with a screwdriver and closing it with a hammer--what is this, the 1920s? And nearly every package design that holds liquid--dishwashing detergent, shampoo, apple juice, wine--has some sort of resealing mechanism, whether it's a cork or a PET living hinge snap closure.

Two aftermarket products addressing this are the EcoPrazi paint brush storage lid and the Bottle Top. The former snaps onto an open can of paint and holds the brush in there to boot, with the idea being that you don't need to wash the brush between uses as the seal keeps it wet and "loaded;" the latter simply snaps onto the top of a can and has a mouth-sized screw top.

I should point out that I haven't tried either of these products and don't know if they actually work as advertised--the cheesy "As Seen on TV" provenance of the latter makes me extra suspicious--but I feature them here to point out that metal cans that are not easily resealable are a rather ridiculous, outdated packaging tech, and I won't be sorry to see them go.

Just read a tip on the internet about saving old detergent bottles and using them to store paint. I'm gonna buy a funnel tomorrow and do this.

The can-don't attitude: Are metal cans not a ridiculously outdated packaging technology?