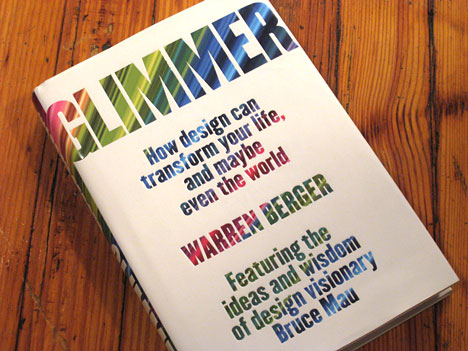 Warren Berger's gave his new book Glimmer the rather lofty subtitle "How design can transform your life, and maybe even the world." We at Core77 are certainly biased, but there's no doubt that we're occasionally guilty of the same hyperbole. What the "design will change the world" camp often ignores is that major social problems they try to solve with design are just that, social problems; issues that involve a diverse range of constituencies, largely amoral economic forces and self-interested politics. Idealistic designers can't simply push "good" design into the marketplace, but often presume that transformative design can be done at the drafting table instead of understanding that manufacturing product is only the beginning (or maybe even that a manufactured product is the problem). Consequently , after reading a multitude of "Business = Design" books, this reviewer was thrilled to read the term "wicked problem" about halfway through. In the glossary, Berger defines wicked problems as "multifaceted and complex problems whose incomplete or contradictory nature is such that each attempted solution often seems to create a new problem." Unlike many design books, Glimmer goes out of it's way to focus not only on designing objects for human interaction, but also to designing systems and structures for human behavior.

Not content with one subtitle, Berger also offers a co-pilot after his byline, "featuring the ideas and wisdom of design visionary Bruce Mau." Mau became famous for his collaboration with the Institute without Boundaries, Massive Change, which was an unabashedly positive exhibit and book about socially conscious design. While Glimmer uses Mau's life and ideas about design, Berger interviews and discusses enough other design luminaries that Massive Change seems more like a jumping off point than a framework. Each chapter is titled with a principle, and while some of them are taken from Mau's Manifesto: "Ask stupid questions," "Go Deep," "Work the metaphor," and my favorite "Begin Anywhere," the other six chapters are from other sources. Indeed it feels as though Berger has been shadowing Core77 for the past several years, having been in the audience with us as we listened to Cameron Sinclair and Emily Pilloton at the ICFF and heard Michael Wolff berate the audience at Designism 2.0. Next time aspiring design students ask me which books to read to prepare for school or work, I'll just give them Berger's bibliography.

Broadly, Glimmer is broken into four sections, involving progressively smaller social groupings: Universal, Business, Social, and finally Personal. All of this seeks to answer the question he asks at the end of the introduction, "What if we looked at the world as a design project -- how might we begin to make it better?" In the beginning, the answer is to think like a child. The first chapter is entitled "Ask stupid questions," and references IDEO's "Five Whys" methodology, where the design researcher or ethnographer is instructed to engage in the child's infinite regress of asking why over and over again to get to the bottom of a problem. In constructing Glimmer, the reader is taken on a journey as Berger asks seemingly everyone, "why?," until he gets his answer.

The first section "Universal" weaves fascinating stories of Mau, Yves Behar and Dean Kamen trying to get at universal principles of design, but it sputters a little with principles like "Jump fences," and "Make hope visibile," because, like a good joke, lateral thinking defies scholarly explanation. For non-designers, however, the case studies presented here provide a strong framework for what goals, constraints, obstacles and results designers look for. For those designers looking to find recipes for success, Glimmer waits until the final section to fully answer the questions posed in the beginning.

While discussing "Business" in the second section, Berger easily adopts the "case study / lesson" approach that's de rigueur in business books, but approaches it in the easy anecdotal style that was co-opted by Malcolm Gladwell for more than a few blockbusters. Consequently, it's eminently readable and breezily informative. Chapter titles like "Go deep" clearly refer to IDEO's Deep Dive, and "Design what you do," takes aim at corporate culture. For business people unfamiliar with design, the section serves a straightforward primer on how design research is conducted and the positive impact a little ethnography can have on product design and corporate profits. For somewhat cynical design book reviewers, many of the companies profiled are familiar. Of course OXO is here, along with P&G, but in a first, while Apple is mentioned it doesn't receive a case study. In a welcome change, we're given instead Lee Clow and his reform of Pedigree's corporate culture along with Alex Bogusky's "truth" campaign. In the now-crowded "design meets business" section of the bookstore, authors seem to cycle through the same examples like an iPod shuffle (see!), and it's refreshing to finally be exposed to a few new ones.

The third and fourth sections, "Social" and "Personal" finally begin to tackle the inevitably "wicked" problems that come part and parcel with being a social ape. Whether it's Cameron Sinclair rebuilding homes after a hurricane or it's Bruce Mau himself tackling his weight and sleep apnea, the hardest problems to design for are ones that we evolved to solve differently. Sadly, people evolved to be greedy both for sugary, fatty food and to be just as likely to covet their neighbor's house as to offer to help rebuild it after a disaster. Consequently, when Mau decided to tackle his weight problem, he viewed it as a design problem. Rather than design a solution, however, he knew he needed to design an environment such that his behavior in that space would solve the problem for him. Successful artists and business people do this already. In order to be productive, distractions need to be hidden away and resources brought to the forefront. Mau's studio already had such a structure. Surrounding himself with inspired and creative people allowed innovation to flow. Berger calls this "Design for emergence." Create the right playpen and the desired behavior emerges. He also references the hard-to-pronounce but easy-to-read Mihaly Czikszentmihalyi, who talked about the Flow state, where challenges are commensurate with skills and people feel profoundly involved. Because rewarding tasks are challenging, they're often hard to start, but once started time slips away into a problem-solving bliss. Mau's work took place in such a flow state. The challenge was to make his life (and all of ours) fall into that state as well.

For me, as an occasional teacher and frequent designer, however, the last chapter "Begin anywhere," provided a concise method for solving this problem in just over 20 pages. The answer to writers' block or designers' block is just to start, well, anywhere. Psychologically, the act of beginning a task ties the actor to the task itself. Applying a critical eye to the function or form of a first prototype creates a path to a second prototype. Drawing a line on a graphic design divides a page, creates a framework, creates constraints for future projects to be obeyed. For students flummoxed on how to begin a 3D CAD sofa, for example, I would teach them to begin with what they knew (seat height, width, etc.). Once the framework is begun, the next steps seem a little easier. Although Berger alludes to this in the beginning with his "Make hope visible" principle, after guiding the reader through Bruce Mau's story from beginning to end, he's also provided the context for the reader not only to understand, but also to believe that the principles of design can solve problems in the real world.