"For its weight, spider silk is stronger than steel, but--unlike steel--it can stretch up to 40% of its normal length," reports the American Museum of Natural History.

Scientists are trying to produce this intriguing material artificially on a large scale for possible uses on the battlefield, in surgery, for space exploration, and elsewhere. Since raising spiders has proven difficult, researchers are investigating ways to replicate spider silk to avoid harvesting. However, spider silk is difficult to mimic in a lab because the silk begins as a liquid in the spider's gland, becoming a remarkably strong, water-resistant solid after following a complicated course through the spider's interior.

Simon Peers and Nicholas Godley are the owners and creators of Spider Silk, a Madagascar-based company dedicated to harvesting the material in ways that can be outputted through human-created production techniques. A rather shocking example of their success is this 11-foot by 4-foot tapestry created by weaving together the silk produced by scores of captive spiders, connected--harmlessly--to hand-powered machines. 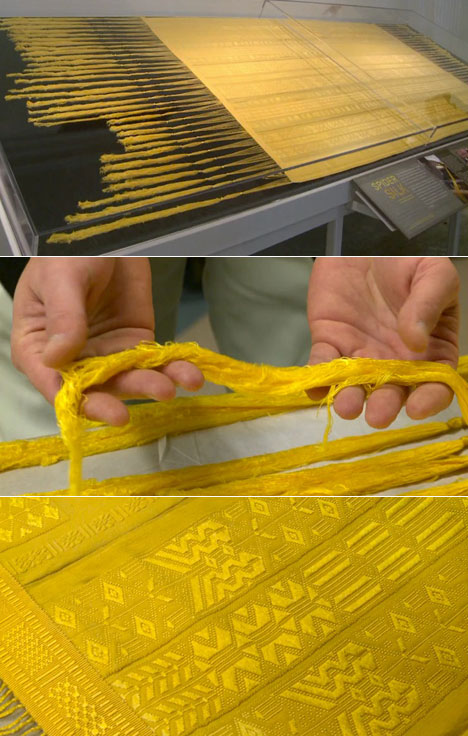 In this video, a very Jeff-Goldblum-in-Jurassic-Park-looking Nicholas Godley describes the process along with AMNH curator Dr. Ian Tattersall:

The tapestry is currently on display at the AMNH's "Traveling the Silk Road" exhibition.