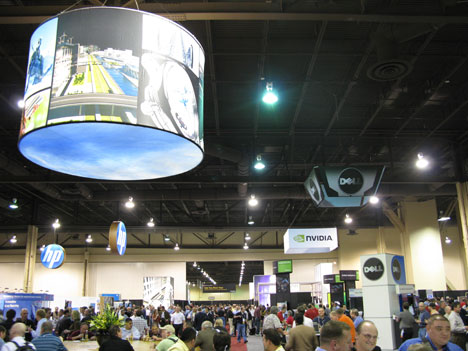 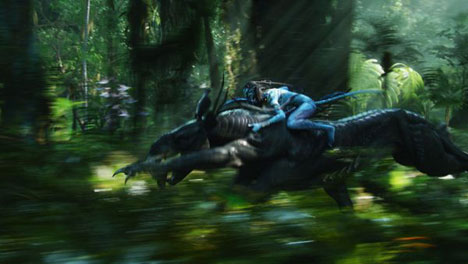 Sadly, folks, one of the most thrilling events at this year's Autodesk University 2009 conference in Vegas is something I was forbidden to record.

James Cameron (in absentia) allowed roughly 20 minutes' worth of unseen footage and different action scenes from his forthcoming Avatar, which was rendered using Autodesk software, to be shown at the conference. The enormous hall was packed for the event, with 3D glasses on every seat and shortly, on everyone's faces as the lights went down.

Cameras were strictly forbidden, and ushers prowled about with night-vision monoculars, scanning the crowd. I wasn't going to risk getting tossed from this event to get Core a grainy, frantically-shot scoop (above is a publicly-released production still), so I left my camera in my bag and watched obediently.

It was mind-blowing. Unlike other CG spectacles like Transformers 2, Cameron's movie has at its heart an incredibly compelling, relevant and well-thought-out narrative, and the technology is used to support that--just like a good product design. His lushly rendered world is there to help tell the story, not be the story, and his usage of 3D is not of the gimmicky Oh-no-a-baseball-is-coming-straight-at-me variety, but is instead utilized purely to immerse the viewer in the tale, removing the "screen plane."

Those who know Cameron most from Titanic may not realize the man is a talented designer, having penned things both fanciful--the Hunter-Killer machines from Terminator, the Alien queen from Aliens, among others--as well as practical and real, like the submersibles he's currently designing to investigate the Mariana Trench.

Lastly, here's the latest HD trailer for the flick: