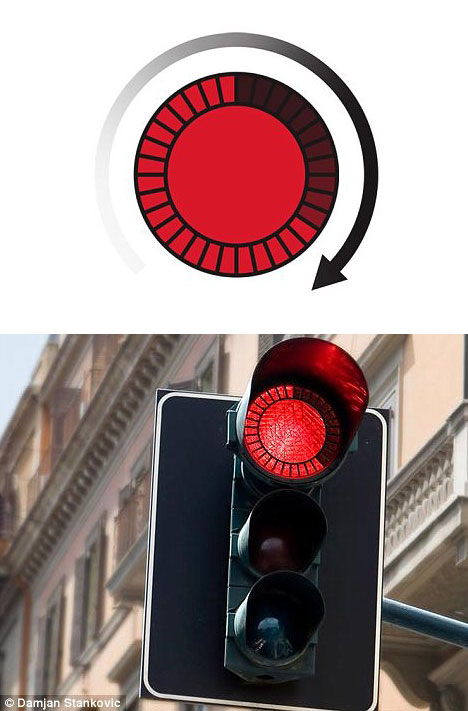 When sitting a red light in New York, you know the light's soon to change when the "Don't Walk" symbols facing traffic perpendicular to you start flashing; with enough experience you can even time it so your car launches into motion at the exact instant the green light illuminates. We're not endorsing this as a safe practice, merely observing that this is common.

Serbian designer Damjan Stankovic has a similar concept in his Eko light, which incorporates a circular, visual countdown timer wrapped around the red light. Stankovic's idea, though, is that rather than enable quicker green-light launches, the countdown light would serve to de-stress drivers by providing them feedback of exactly how much longer they'll have to wait.

Mr Stankovic claimed the device would reduce stress felt by drivers and could even help the environment. He said: 'Since you know exactly how long you have to wait you can sit back and clear your head for a while. No need to keep your foot on the gas. Relax.'

He added: 'When you think about it, you don't need this information counted in seconds, you just need to see the speed of the progress bar to give you an estimate of the time.'

Mr Stankovic said drivers could also turn off their engines while waiting for the green light and that the design may also make driving safer. 'With the Eko light both drivers and pedestrians can be fully aware of how much time they have left before the light changes and that way reduce the chance for potential traffic accident,' he said. For that reason he decided only to include a counter for the red light as the green light might encourage people to start off too quickly.