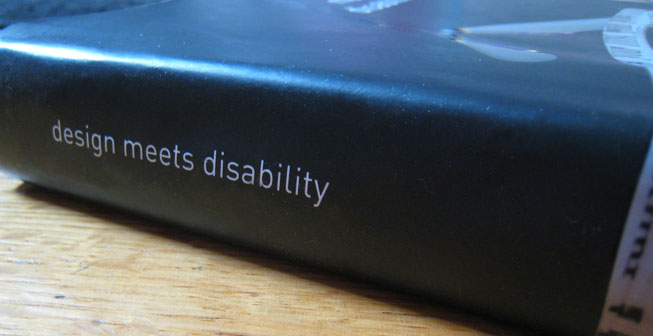 Even the sighted often suffer from a sort of blindness. When another human being walks into their visual field with an "impairment," the immediate reaction is frequently either to stare or to look away. Whether witnessing genetic, geriatric or accidental injuries, healthy people have an aversion to being reminded just how fragile their bodies are. Consequently, a book called Design Meets Disability isn't the first thing that a "fashionable" designer might pick up off the shelf no matter how sexy amputee/paraplegic Aimee Mullins happens to be, nor how gorgeous Cutler and Gross's eyewear advertisements appear ... and that, um, short-sightedness is rather unfortunate. Although it was released a while ago, Pullin's book is worth a look. 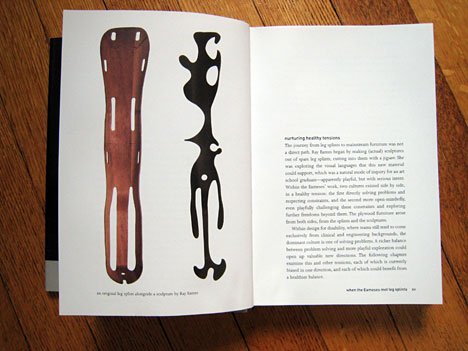 The design press is finally beginning to realize the importance of the design brief, and how critical it is in an era of manufacturing freedom to have constraints. However important the constraints required for the latest gadget seem to be, they pale in comparison with the criticality of details like fit and comfort in prostheses or function and ease of use in communication tools for individuals with cerebral palsy. What ties together these projects, along with things like Charles and Ray Eames' iconic bentwood leg splint from WWII is a sense of urgency. Users don't simply need these solutions, they need them yesterday. Fortunately, old aphorisms about progress during wartime happen to be true, and just as the Eames bentwood splint evolved into some of the most beautifully simple chairs ever built, so too has the evolution of hearing aids presaged earbud headsets. We can only imagine what influence the latest innovations in prosthesis may have on human work or transportation in the future. In Design Meets Disability, Graham Pullin applies a lens to a field where most of us look away. 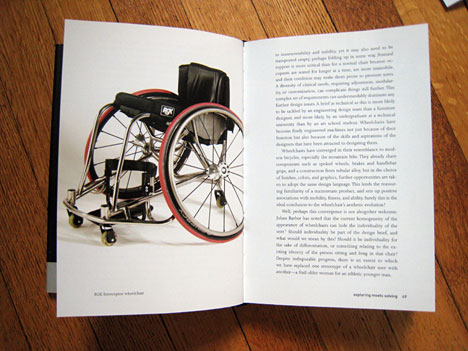 Of course, "disability" is a contentious subject, and even the introduction affords much of its space to a sensitive discussion of terminology. The World Health Organization includes a somewhat pandering definition of "disability" as "a complex interaction between features of a person's body and features of the environment and society in which he or she lives," which is broad enough to undermine its usefulness as a word. Far clearer is the use of "impairment" which is simply "a problem in a body function or structure." The solutions that Pullin profiles approach both disability and impairment with varying degrees of success. 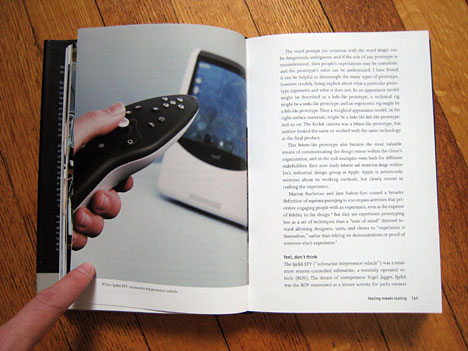 Design Meets Disability is broken into two broad sections: Initial Tensions and Meetings with Designers. In the early sections Pullin addresses the tensions between the medical community (which tends to address impairment) and the design community (which often tackles the societal issues of "disability"). Each chapter is entitled "X meets Y" and includes glossy images of products accompanied by explanatory text and user and designer profiles. The first chapter is entitled "Fashion meets discretion" and frames the thesis of the book in miniature. Pullin enquires why glasses can be viewed as a fashion accessory while hearing aids and prostheses are not. He tackles the problem as though it is largely an aesthetic one that designers can solve, but it seems to include intractable cultural and genetic bases as well. The need for glasses crops up with frequency in both adolescents and adults. While improvements in the form factor of glasses contribute to their fashionability, it seems that the increasing prevalence of literacy and the need for close detail work also had an effect on both vision and as glasses become more commonplace, they became more fashionable. This could be contrasted with hearing aids, which tend to be needed later in life ... although if the iPod generation continues to ignore volume recommendations, hearing aids may make the transition some day as well. 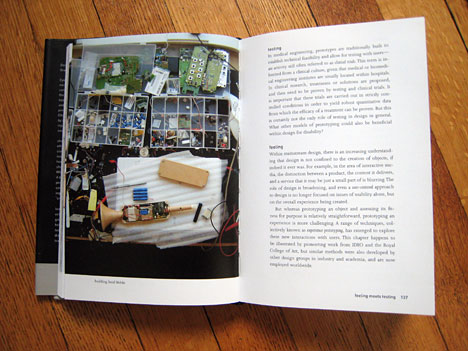 Later chapters such as "simple meets universal" and "identity meets ability" begin to address crossover products, where the designer's role to audit the functionality and inputs of electronic products can aid "impaired" and "unimpaired" alike. Further, innovations such as tactile watches for the blind can crossover towards users who wish to tell time discretely. The chapter "Provocative meets sensitive" includes conceptual products that force previously private acts into the public sphere (such as a cell phone horn that vocalizes the act of dialing). Not seeing a lot of mass market adoption there, although the points illustrated are interesting. Likewise the chapter "Feeling meets testing" provides interesting case studies of the user experience portion of design, but only tangentially relates to disability. The first section comes to a close with the really interesting "Expression meets information" which introduces us to The Speaking Mobile, a digital "speaking" tool which allows the user to only say "Yeah" and "No," but to inflect those responses with pitch by using thumbsticks. By translating verbal inflection into gestural movement, The Speaking Mobile provides a functional, fun and interesting new ability for any user who picks it up.

The second section "Meetings with Designers" presents a series of interviews/hypotheticals on potential designers for products for impairment. Some, like "Tomoko Azumi meets step stools" include interviews and sketches with the designer, while others like "if Philippe Starck met bottom wipers" are fantasy pairings. The actual interviews are listed in bold in the table of contents, in a nice designer-y touch. Several of the interviews are as fascinating for their subject as their contents, and it's nice to see the inside of Michael Marriot's studio and pages of Martin Bone's sketchbook, but even when the section is super cool (like learning about Andrew Cook's tactophonics kit), they either far too brief to be fully realized or don't connect in a particularly clear way to disability itself. When devoting nearly half the book to "case studies," I would have hoped there would be more study and fewer cases. 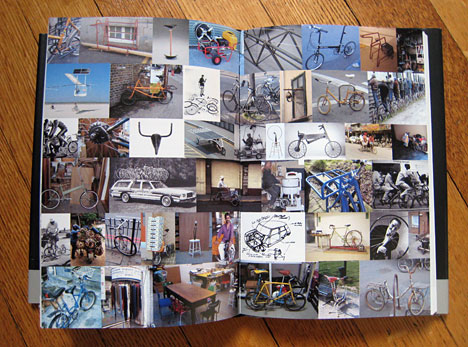 In closing, Design meets Disability doesn't precisely embody its title, at least according to a layperson's definition. While Pullin does a thorough job of exploring the cultural, stylistic and fashion trends that influence the acceptance of objects that overcome "disability," the action of design on "impairment" is largely neglected. When Aimee Mullins talks about her legs at TED, she describes relating to kids as an ideal audience without preconception. They were enthusiastic about the "superhuman" abilities that some prototype legs were able to give her. While the gorgeous carved legs that she modeled for Alexander McQueen were striking, it was the functional but aesthetically unorthodox "cheetah" legs that brought her to public prominence and allowed her to transcend preconceptions by competing with Division I athletes and then setting Paralympics records.

Perhaps the trouble with expecting prosthetics to transcend human preconception on a fashionable basis alone is that culture itself transcends fashion. Indeed, fashion trends are often originated by those of sufficient social status to ignore preconceived trends (think rock and roll style). Consequently the best lifestyle improvements for the "impaired" is to allow them the facility to excel within society. Through this lens, the WHO's definition of "disability" seems a little condescending to the "disabled," but horribly unfair for society since most of the impact of society on the "impaired" is anything but negative. Aimee Mullins' legs exist because of a complex interaction between scientists, engineers and every human being who has ever added value to the world economy. The transformative moment for the culture was when a talented and charismatic figure like Mullins met Ossur's Flex Foot Cheetah leg. Consequently, while imagining what happens when "Hussein Chalayan met robot arms" is a fascinating thought exercise, the real future will come when the next Aimee Mullins meets "Hussein Chalayan's robot arms" and exceeds what we thought were humanity's limits once again.