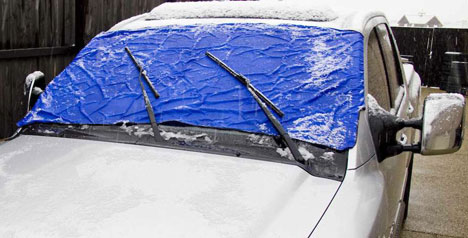 I dislike scraping snow off of windshields, because I can never reach that spot in the middle without leaning against the snow-covered car and eventually winding up with melting snowflakes on my lap in the driver's seat. So here's a why-didn't-I-think-of-that life hack from One Man's Blog: Before a snow storm, throw a tarp--or heck, an artfully-slit garbage bag--across your windshield. Before putting it on, deploy the wipers and turn them off mid-way, so you can use the arms to secure the cover. In the photo above, it looks like he's also drawn the edges of the tarp inside the car and shut the door on them to hold it in place. Clever!