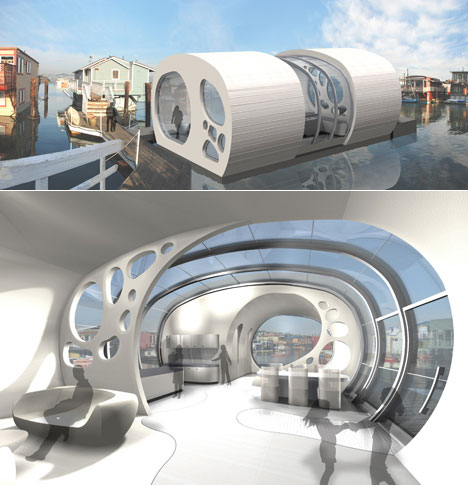 San-Francisco-based designer Joanna Borek-Clement's Tafoni Floating Home concept is intended to "change the attitude towards living on a houseboat and promote a lifestyle that limits disruption of the environment." Named for a type of naturally-occurring sandstone sculpture that exists in Northern California, the Tafoni is a compact but airy-feeling structure designed for minimal impact, unbeatable views and a largely wall-free interior construction.

Promoting a New Attitude in Residential Design and Living

The primary goal of this conceptual project is to change the attitude towards living on a houseboat and promote a lifestyle that limits disruption of the environment. Tafoni is spacious, yet compact. Typical houseboats have low ceilings and often feel cramped, which can detract from comfort many residents desire of their homes. In contrast, even though Tafoni has a relatively small floor plate, it is spacious because of the high ceiling and the minimal amount of full-height interior partitions. The partial-height sculptural walls divide the space visually and increase the interaction between people without limiting views. Tafoni is a multi-purpose living pavilion that serves as a permanent house, a weekend retreat, a relaxing summer destination or a place to entertain friends and hold business parties. In the current era of overpopulation and decreasing greenfields, building houseboats is a solution we should consider.

The exemplary location of this project is the houseboat district in Sausalito, California, which features the beautiful views of San Francisco Bay overlooking neighboring Tiburon. This area serves as a permanent residence for many and is an example of peaceful coexistence between humans and nature. Every respectful and creative design, both modern and traditional, is accepted here; the residents pride themselves in the diversity of this floating enclave, which inspires everyone who comes to visit. Living close to unspoiled nature means being surrounded by beauty that enriches life in a way that apartments and on-land houses do not. Floating homes respond to low and high tide and more intimately connect with the environment than suburban houses with manicured backyards. Tafoni helps one discover the possibilities available with realizing that a living space can be very different than the one we grew up in and are used to.

The substantial damage to the environment in traditional on-land construction happens immediately at the start of the project; plants must be removed from greenfields that, in turn, impacts the natural nesting habitat of wildlife. In urban sites the construction debris associated with demolition and remodel of an existing building typically adds to the global refuse problem. Houseboats, as opposed to traditional homes, have no foundations that permanently impact the land. They can be moved from one dock to another to allow the shaded land underneath them to recover. Houseboats can be disassembled and transported to another location in a different city. The environmental goal of this project is to give Tafoni owners the flexibility and options that are invaluable in an environmentally conscious lifestyle.

Local Inspiration from the California Coast

The natural flora and fauna of the California coast provided inspirations for the project. First among them is a tafoni rock formation.

Tafoni are beautiful naturally occurring sculptures of stone, commonly sandstones. These extraordinary rock formations are hypothesized to be results of salt weathering. It is a unique phenomenon that is common along the Northern California shore in such locations as Salt Point State Park in Sonoma County. Their diversity and simple geometric beauty is astounding, shaping the design of the houseboat.

Other important inspirations are the simplicity of coastal pebbles and the beauty of ocean waves. The furniture and casework in the Tafoni project are entirely inspired by smooth, oval-like pebbles polished by the water. Also, the sleeping area features an ocean wave wrapping around the bed formed by the additional curved interior wall separating the bedroom from the bathroom area. The floor pattern references the linear graphics found on California coastal pebbles.

The middle part consists of a fully glazed sunroom that contains the kitchen, dining area and the main entrance to the boat.

The front part of the houseboat is occupied by a living room and the back part contains a bedroom. Both of these areas feature views of the Bay framed by tafoni-shaped windows. There are no full-height interior walls with the exception of the bathroom and walk-in closet.

The framing of the houseboat consists of the modular repetitive ellipsoidal wooden trusses that can be mass-produced to conserve resources and energy. The ellipsoidal shape of these structural elements allows for a large spanning capacity, thus eliminating the need for additional walls and columns that would cram the space inside affecting the quality of the interior space.

The floating pontoon for this houseboat can be made out of variety of materials, including fiberglass or concrete, depending on a specific location of the houseboat. In the exemplary location in Sausalito, the preferred option is a prefabricated concrete pontoon that has a high strength, durability and carrying capacity while requiring little maintenance. One of the characteristics of the San Francisco Bay is a constant change in the water level caused by high and low tide. The pontoon needs to have a sturdy structure and an ability to take the ground. Concrete is a durable and inexpensive construction material utilizing aggregate that can be harvested locally additionally contributing to the sustainability of this project.

Joanna Borek-Clement, LEED AP, is a designer in San Francisco, California. Her conceptual research focuses on redefining sustainable ideas through the multi-disciplinary languages of architecture, urban design, jewelry and digital graphics. Combining a variety of design disciplines, which includes being a contributing writer for eVolo Architecture & Design Magazine, developing theoretical projects with practicing architecture at DGA Planning | Architecture | Interiors gives her a solid base for a multifaceted design approach.

Joanna is currently employed as a designer in DGA Planning | Architecture | Interiors where she has worked since 2006. She was educated in Krakow, Poland where she graduated with a Masters Degree in Architecture and Urban Planning from Krakow University of Technology, the only architecture program in Poland officially accredited by the Royal Institute of British Architects. She is currently pursuing her foreign degree evaluation with EESA-NAAB and IDP accreditation with NCARB. During her fourth year of college she was awarded a scholarship to participate in a semester long exchange program with the College of Architecture and Design at the University of Tennessee, Knoxville.