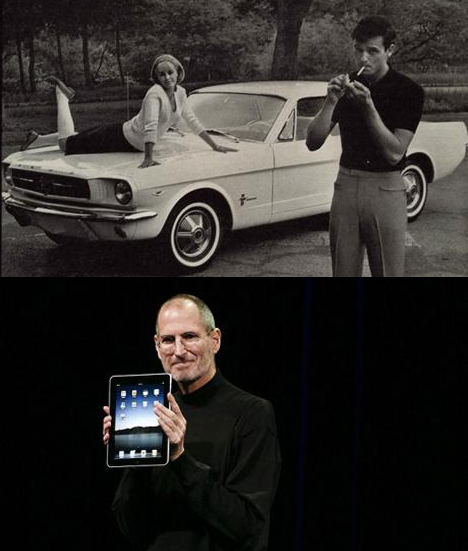 Now that we find ourselves in a post-iPad world, I have taken some time to reflect, not on the device itself but rather the years-long spectacle that surrounded its dramatic release on January 27. The media storm that surrounded iPad was nothing that even the likes of Apple had ever seen. Every cable news network, blog, and business publication was speculating and sharing scant rumors about every aspect of the device from its implications on the Apple's stock valuation to the fate of entire industries.

It is apparent that in the past ten years, with the rise of major Silicon Valley corporations, we have become a culture of individuals that identify most with technology companies and their products. As the national auto industry has declined and our view of transportation has evolved, slowly the automobile has fallen out of prominence as our national symbol of innovation and industry.Not too long ago the "Heartbeat of America" was Chevrolet and we all clamored to get a look at the next Ford Mustang. Kids today (and the general public for that matter) are no longer obsessing over the new car released at the Detroit Auto Show (can you even think of the last car to get on the cover of the NY Times that wasn't promoting a new energy solution?) but rather, are focused on when they can get their hands on the newest insert device (iPhone, iPod, Kindle, PlayStation, etc.). We have become a nation that identifies not in the steel and chrome stylings of the automobile but with the smooth glass screen of a phone or other portable device. Smack at the center of this is the institution of Silicon Valley.

Wrought with all of the intrigue and drama of any good American love relationship, complete with secrecy, espionage, break-ups, it won't be long before we start to hear recording artists echoing the affairs of Google, Apple, and the whole bunch (hopefully not). In Detroit the products were created from concept to construction in the United States, a truly populist ideal. Today's "muscle-car race" in the Valley is really about the marketing of high-end products manufactured overseas, a decidedly less inspiring pillar of industry for a country struggling to lead and innovate once again.

While this Detroit-Silicon Valley comparison may be fun (i.e. getting a new phone to attract girls/guys versus a shiny new Camaro), culturally its significance lends itself to a larger issue. We once adored automobiles as the backbone of our American industrial prowess. Now, we are now fleetingly mesmerized by a glorified computer, presented as having the capability to "change the way we live," only to see its obsolescence in six months. The most disheartening implication for the new cultural institution of Silicon Valley and the decline of Detroit is the lack of permanence for any of this manufactured romance. In an object-obsessed culture where we initially celebrate our new possessions so passionately, we now form no lasting bond with any items. They are basically disposable. What will our "vintage" be, and where will we as a generation seek inspiration in the future if there is always a newer edition to replace the old. Automobiles have been updated annually in a similar fashion but something tells me we won't be seeing any iPod rallies or swap meets down the road. It is up to designers to again question the meaning of "sustainability" and to approach this new era with an appreciation for the past.