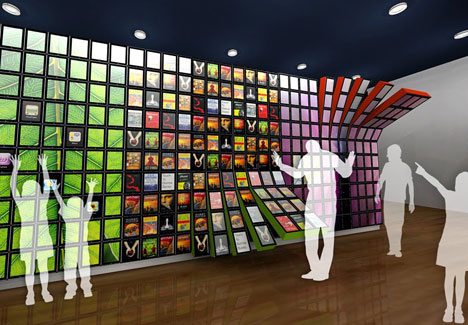 This concept by Clarke Hopkins Clarke, to take a bunch of "recycled/refurbished" iPads and make a wall out of them, initially seems interesting...and then you start thinking about it. The description makes little sense:

There is no concern for the wall being obsolete in a few years time with the launch of new technologies. Each iPads contains its own processor and hard drive, the combined processing power and disk space will be so large that the wall will last for many years to come. The modular design will also make installation and replacement very easy.

With the built-in features of the iPad and customisable applications, there is literally an endless number of things we can do on the wall. Interchangeable wallpaper pattern & video is just the beginning, but imaging a giant jigsaw that you can play using multitouch, an interactive aquarium scene, digital graffiti, interactive speaker wall, even a life sized digital bookcase for your iBooks! (If you can't reach the top shelf, just drag it down with multi-touch!)

For wallpaper and patterns--why do you need an iPad? Ditto for interactive aquariums and graffiti; oughtn't you just purchase cheaper touchscreens? And the bookcase is where they really lose me: For one, who wants to read a book standing at a wall, and two, that bit about not being able to reach the top shelf--so we're supposed to get a ladder, then manually slide a book along different screens until it reaches our eye level?

The whole concept of the iPad is that it is a personal and intimate device. Throwing a few hundred of them on a wall does not make that wall either of those things. This is a prime example of taking a hot product and generating a half-baked concept around it to generate some buzz, and we have to rate it a Fail.