Municipal governments regularly collect all manner of data across multiple strata, everything from restaurant inspections to mass-transit alerts to lists of recycling centers and at-large, wanted murderers. Most of this data is publicly available, but until recently there was never a device that would easily get this data into the hands of citizens; the proactive city-dweller would have to comb through virtual reams of webpages to find it.

In a surprisingly forward-thinking bid to disseminate that data on the off-chance it might do some good, last year New York City's Economic Development Corporation sponsored a NYC BigApps competition, whereby entrants would design easy-to-use smartphone apps incorporating the data, and updating it in real time. Yesterday they announced the winners, and the top three are:

The WayFinder demo is pretty awesome:

I personally found the winners interesting but not that relevant to me; however, the People's Choice awards went to an app called NYC Way, which I downloaded out of curiousity. And it is amazing! The information on it ranges from merely interesting (how long would an ambulance actually take to reach your current location?) to totally useful (real-time views of traffic cameras around the city, real-time subway updates). It also makes great use of your phone's GPS locator--hit a button and it not only shows you all of the nearby restaurants, but provides you with their health inspection reports. I was kind of grossed out to see what goes on in the kitchens of the restaurants in my neighborhood that I regularly eat at.

Overall I was impressed at the depth of the application, as it seems they have incorporated data from every city organization you could think of. I've only mentioned a few of the functions here, but check out the app for yourself--it's free! 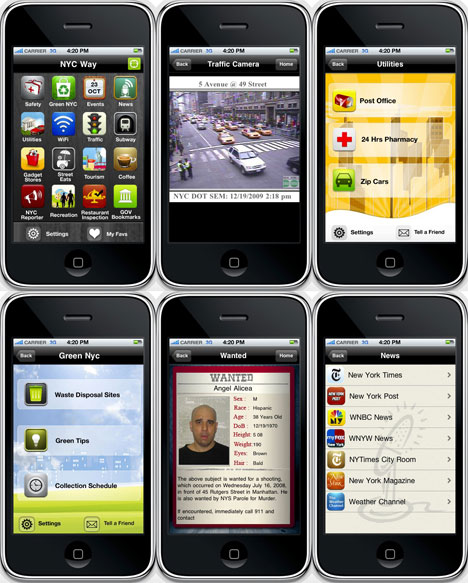