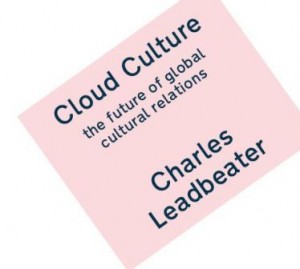 The British Council commissioned Charles Leadbeater to think about the cultural implications of "cloud computing", i.e. when the network, rather than the PC, becomes the computer.

His report, Cloud Culture: the future of global cultural relations, is -- according to The Guardian -- "a well-informed, provocative sketch of a world in which most cultural products will be published online and held in the 'cloud' enabled by the huge server farms of Google, Amazon, Microsoft, Apple etc. As a primer on the debate between optimists and pessimists about the cultural implications of ubiquitously available internet access, it'll be hard to beat. Leadbeater calls himself a "realistic optimist" and thinks a cloud-based approach to cultural relations will build communities of collaboration around shared interests and ideas on an unimaginable scale."

Here is the synopsis:

The internet, our relationship with it, and our culture is about to undergo a change as profound and unsettling as the development of Web 2.0 in the last decade, which saw Google and YouTube, Facebook and Twitter become mass, world-wide phenomena. Over the next ten years, the rise of cloud computing will not only accelerate the global battle for control of the digital landscape, but will almost certainly recast the very ways in which we exercise our creativity and forge relationships across the world's cultures. Yet even in its infancy, the extraordinary potential of cloud culture is threatened on all sides - by vested interests, new monopolists and governments, all intent on reasserting their authority over the web.

In this ground-breaking report, Charles Leadbeater argues that we are faced with the greatest challenge of our time: the clash of cloud culture and cloud capitalism. Who will own the cloud? How can we keep it open and reap its vast benefits? And how can it empower the world's poorest people?