Don't just cook your meals--manufacture them! 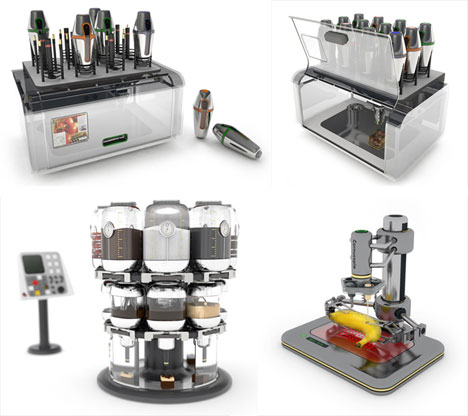 MIT designer and researcher Marcelo Coelho, whose work focuses on "the intersection of human-computer interaction, materials science and design," is working on something akin to RP for food. Behold his Digital Gastronomy Machines, which are like meal-manufacturing devices: 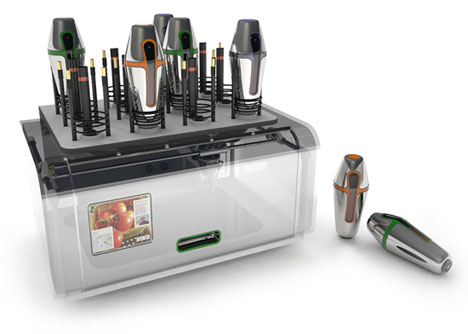 The Digital Fabricator is a personal, three-dimensional printer for food, which works by storing, precisely mixing, depositing and cooking layers of ingredients. Its cooking process starts with an array of food canisters, which refrigerate and store a user's favorite ingredients. These are piped into a mixer and extruder head that can accurately deposit elaborate food combinations with sub-millimeter precision. While the deposition takes place, the food is heated or cooled by the Fabricator's chamber or the heating and cooling tubes located on the printing head. This fabrication process not only allows for the creation of flavors and textures that would be completely unimaginable through other cooking techniques, but, through a touch-screen interface and web connectivity, also allows users to have ultimate control over the origin, quality, nutritional value and taste of every meal. 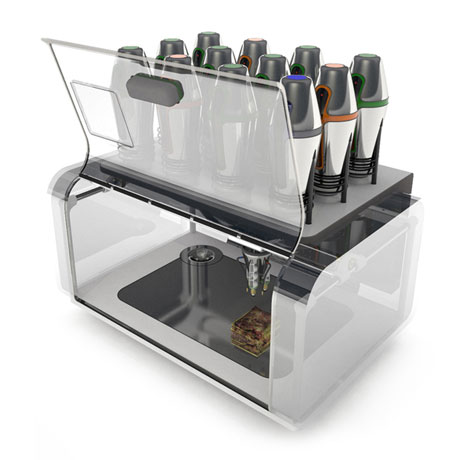 Then there's his Robotic Chef, which would not look out of place in a machinist's shop: 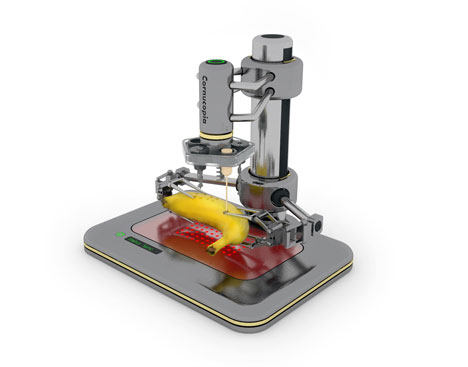 The Robotic Chef is a mechanical arm designed to physically and chemically transform a single solid food object, such as a steak, fish or a fruit. It allows for two types of transformations: localized and precise manipulations performed with an array of tools located in the toolhead; and global transformations performed through the underlying bed and two 5-degree of freedom robotic arms.

The toolhead holds an array of interchangeable manipulation devices, such as a drill bits, mineral and spices injection syringes, and a lower power laser diode, which can programmatically cut, cook and spice the food held by the arm. The underlying bed houses a heating plate which can heat and cook the food while the arm can apply mechanical transformations, such as compressions, elongations, and torsion, as well as control the location of the food underneath the toolhead. These transformation processes allow cooks to exert highly localized and repeatable food manipulations that would be impossible to achieve through traditional cooking methods.

Lastly, his Virtuoso Mixer, which I totally want (because I am terrible at estimating amounts and will frequently add a tablespoon of something rather than half a teaspoon, ruining my meal): 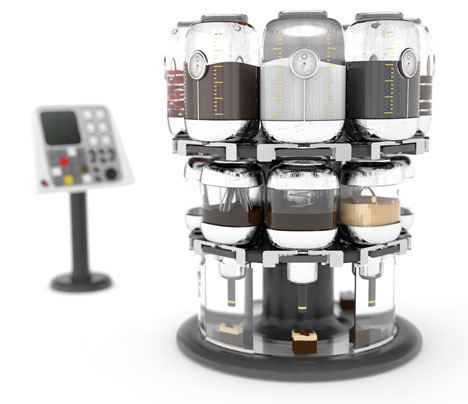 The Virtuoso Mixer is a machine composed of a three-layer rotating carousel that provides cooks with an efficient way to mix multiple ingredient variations and experiment with subtle differences in taste and composition. At the top layer, we find eight containers that can be filled with off-the-shelf ingredients and are outfitted with weight scales, as well as temperature and humidity sensors for monitoring the properties and quantity of food they contain. The middle layer houses eight mixing containers with several types of crushing and mixing devices. The final, lower layer, functions as an extrusion tray where the final ingredient mixture is deposited. It is outfitted with an array of thermoelectric heating and cooling elements and an insulating glass cover for quickly baking and modifying the temperature of the produced mixtures.

The machine's interface is designed to allow users to easily and rapidly experiment with different ingredient combinations. As ingredients move from the top to lower layers, they can be combined in precisely controlled amounts, crushed and mixed to different degrees, and eventually be extruded to compile food samples made of discrete layers with varying thicknesses. The large range of possible combinations allows chefs to quickly design, produce and evaluate (by tasting) several ingredient combinations. The final digital recipes can eventually be saved, shared with other machines or users, or be simply retrieved by the same machine for the future preparation of a meal.