"Cars, Culture and the City" at Museum of the City of New York 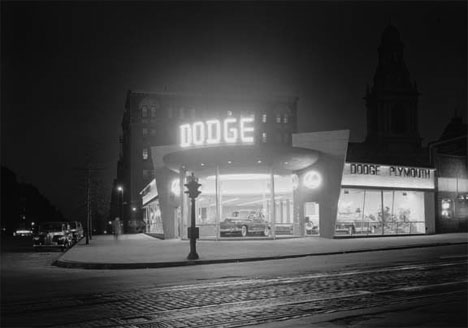 A number of things come to mind when thinking of American car culture—Motor City, Southern California, Route 66, American Graffiti—but New York City is not usually among them; this is an oversight. Though heralded as one of the few places in America you can live without ever having to learn how to drive, the metropolis actually played quite a role in jump-starting the American automobile industry (with early adopters like the Astors and the Vanderbilts) and shepherding the car's undeniable impact on the American culture and landscape—Mayor Bloomberg's current plans for automobile-free streets comes to mind.

"Cars, Culture and the City," opening at the Museum of the City of New York on March 25th, will be the first exhibition to "document New York's role in the promotion, marketing, and proliferation of the automobile as well as its transformative effect on the city and, ultimately, the country." Expertly curated by Donald Albrecht, the Museum's curator of architecture and design, and Phil Patton (author of Classic Cars: 100 Years of Automotive Ads), the show will feature rarely-seen drawings, models, historic photographs, films, advertisements, and architectural schemes that give insight into the city's relationship with the motor vehicle.

Below, a few of the highlights: Visionary drawings in the utopian spirit of the 1920s by urbanist Hugh Ferriss (1889-1962), and a rarely-displayed 1972 drawing by architect Paul Rudolph (1918-1997), on loan from the Museum of Modern Art, in which he proposed, through architecture, to alleviate the environmental impact of Robert Moses's highly controversial Lower Manhattan Expressway (transecting Canal Street); other stunningly inventive drawings, many redolent of science fiction, and excerpts of a feature film, all depicting New York as a quintessential "city of the future"

A salesman's model of a 1932 Graham-Paige "Blue Streak," made by the Corcoran Toy Company of Indianapolis, IN, and used to more fully promote this automobile's options for paint and opalescent finishes; and models of streamlined cars by legendary industrial designers Norman Bel Geddes and Walter Dorwin Teague, Jr.

Rarely exhibited Technicolor promotional films created by General Motors for its 1950s Motorama exhibitions at the Waldorf Astoria Hotel, which then toured the country

Women's fashions, including a cap with built-in goggles: the car--especially the electric cars (which did not have to be hand-cranked) popular in the first two decades of the 20th century--gave women unprecedented mobility; the city's department stores offered the clothing that matched this newfound freedom and celebrated the spirit of adventure

A drawing and a 20" long model of the mid-1960s New York Safety Sedan, equipped with a periscope for optimal viewing so as to reduce traffic fatalities; it was commissioned by Nelson Rockefeller and designed by New Yorker Richard H. Arbib (1917-1995)

Ephemera that documents New York City's distinctly brash style of "in-your-face" advisories for parking and traffic control, including one for jaywalking and the iconic "Don't Even Think About Parking Here" sign; the exhibition also documents the inception of the "alternate side of the street" parking program launched in the early 1950s to better facilitate city street cleaning

Photographs by Paul Strand, Gary Winogrand, Weegee (Arthur Felig) and other photographers, and works of art by Albert Gleizes, Bruce McCall, and other artists

"Cars, Culture and the City" at Museum of the City of New York