Amidst the crisis, Korean automakers doing well--and they seem to "get" design 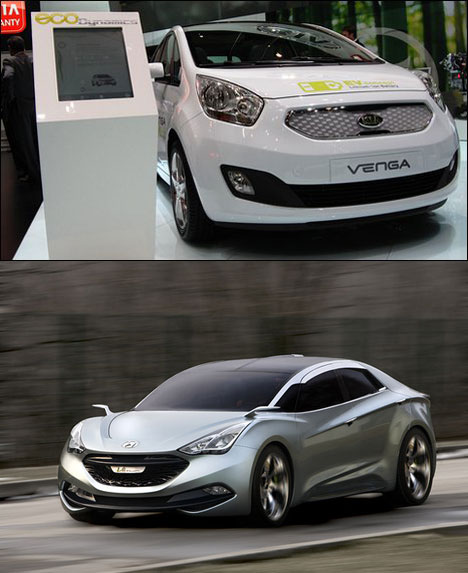 The past two years have seen a lot of upheaval in the auto industry, with some operatic rises and falls. Two of the world's automakers that have been chugging along largely unnoticed amidst the drama (while quietly making profits and increasing in size) are Hyundai and Kia; and the good news for us is that in both companies, design is playing an increasingly significant role, particularly since they have each invested in design centers on three continents.

In an article looking at Kia, the BBC reports that

[Paul Philpott, Kia Motors Europe's COO] believes the key driver to future growth lies within the cars' design, penned in Kia's global design headquarters in Frankfurt, as well as in Seoul and in California.

"With the new products that we are now bringing to the market, the product design is coming together as one family," he says.

Meanwhile the Wall Street Journal's report on Hyundai points out that

Hyundai slowly beefed up its design capabilities over the past decade, adding staff in South Korea and building new design centers in Irvine, Calif., in 2002 and Russelsheim, Germany, in 2003.... Inside Hyundai, the designers battled a tradition that gave engineers and factory-process experts the final say in product design. In one recent instance where designers won out at Hyundai, the new Sonata has a thin line of chrome that stretches from the headlights along the hood and top of both doors to the back window. Keeping that lined up in production is a challenge for factory workers and, as a result, engineers resisted it, say company officials.

The article also points out that Hyundai, like BMW and the other big dogs, is seeking a unified design aesthetic across its fleet, the sort of "design DNA" we often hear about at lectures championing the importance of design in business.

Speaking of business, the already-giant Hyundai's global sales grew 10% last year, while the rest of the industry's declined by 2.5%; meanwhile up-and-comer Kia saw a staggering 1,200% (that's not a typo) increase in net profits and a 270% increase in operating profits in 2009. So while there are currently tons of auto designers being downsized worldwide, hopefully they'll soon have a place to go.

Amidst the crisis, Korean automakers doing well--and they seem to "get" design