Neolithic is back: Simparch's giant head in the Kielder forest 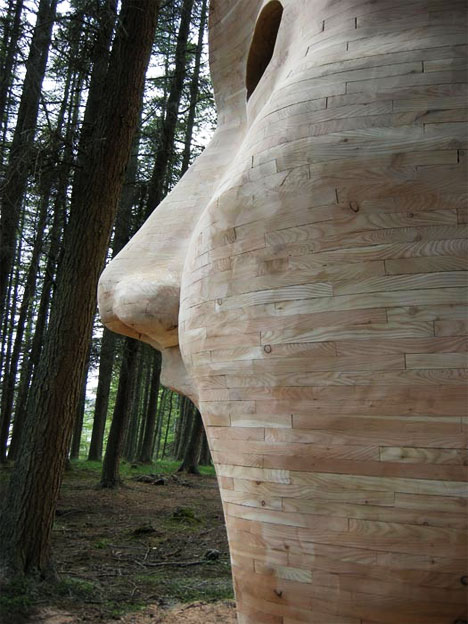 You've probably seen Clay Furniture by Marten Baas, Timeless Objects by Boym Studio, and maybe also the concoctions from hot wax and sticks by Jerszy Seymour's Coalition of Amateurs. Here's another project that shares that pre-industrial, primitive sensibility: Silvas Capitalis, or "Forest Head," was conceived of and built by SimpArch (who, despite appearances, have only been around since 1997 or so).

The "large, anthropomorphic offering," situated on the grounds of the Kielder forestry plantation in England, was inspired by the anonymous Celtic gods of Britain who were often represented by their head alone. In Kielder's relatively young, cultivated woodland, this giant head "sits knowingly, watching and listening to the nuances of daily forest life—the creatures, the wind, and the roar of harvesting equipment." Two stories tall, the construction is large enough to occupy. There is a bench on the first floor and two lookouts (through the eyes) on the second. 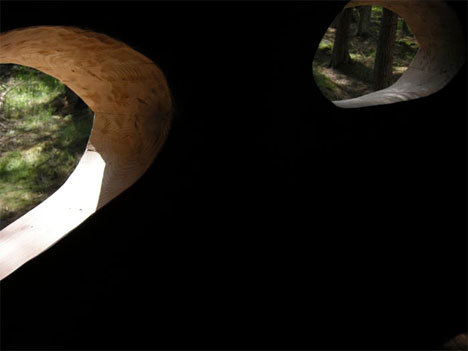 In devising and constructing this "offering," Simparch mixes basic hand-building techniques with digital ones. Instead of modeling the head on the computer, for instance, 107 pieces of a plywood model were scanned to produce the full-scale paper templates that were then used on site. Each piece of lumber was cut to the drawing, stacked, glued and pegged together, then shaped with a chainsaw and grinder, which lends it a charming quality of imperfection.

This project is a nice reminder for to be direct in both our sketchbooks and construction methods—go with what has legs and let the line between the digitally fabricated and hand-built be a fluid one.

Neolithic is back: Simparch's giant head in the Kielder forest