Raleigh is a Smooth Coat Fox Terrier interested in the influence of dogs on Industrial Design. When she is not busy looking for a fox to hunt, she helps her owner with her blog. This month, Raleigh met up with Pug-owner Russell Flinchum, design historian, teacher, curator and author of "Henry Dreyfuss, Industrial Designer: The Man in the Brown Suit."

We're in Russell Flinchum's kitchen where he's meticulously attending to what he calls, "the Pug routine," a process of feeding his 13 year old dog, Vim Da Pug. As Vim hops around the trash can anxiously, Flinchum peels a hardboiled egg, discards the yolk, and plops the whites in the food dish. Next are the steamed broccoli and steamed chicken breast. Flinchum then becomes distracted—on the counter by the bowl rests a new acquisition for the Industrial Design historian, an original Osterizer blender that he dates to 1946. He thinks it is the "Beehive" model, inspired by the 1937 Waring "Blendor," endorsed by band leader Fred Waring himself. He flicks a switch to show off the powerful whirr of the motor, sending Vim into paroxysm of fury over the neglected food preparations. As the motor quiets, Flinchum tops off the food dish with a scoop of Eukanuba Reduced Fat Senior Formula Dry Food. It's the bag that comes with a Pug on the front; the stocky breed makes a great advertisement for the dog on a diet. 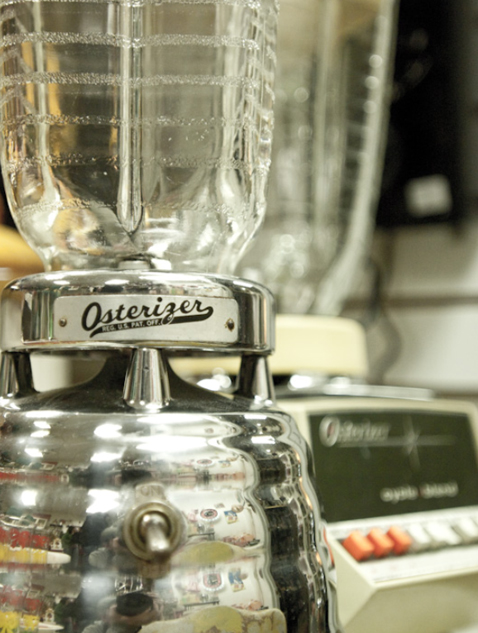 As Vim eats, we settle on the couch to discuss the topic at hand—dogs and industrial design. It's no accident that the beige couch matches Vim's fur; Flinchum's waging a never-ending war with shedding. There are a million and one products made to remove pet fur, but Flinchum, design junkie though he is, isn't interested. "Sticky tape," he says, "works just fine." Fair enough.This embodies Flinchum's whole hypothesis on good design. Leave out the bells and whistles and just give him something that works really well. It's why he's so hung up on mid-century modern. "I don't want objects that are cutting edge. Or any edge." He says. Which brings us back to Vim. Pugs aren't pretty, to put it lightly. You might say that they're so ugly they're cute, but even such a backhanded compliment is often a stretch, though we aren't one to judge. Flinchum describes Vim as, "visual discordance," or, "a dog made of spare parts." With legs too short, a body too wide, eyes too bulgy and a face too flat, this seems about right. However, Vim is a testament to durability and adaptability.

Flinchum's main beef with design these days is the dichotomy between the cheap throwaway and the unaffordable high-end object. To the biographer of Henry Dreyfuss, it was never supposed to be this way. When Dreyfuss became a consultant at Bell Telephone Laboratories in 1930, he demanded to collaborate with the engineers instead of just applying an aesthetic. His model 500 design of the telephone in 1949 had an unobtrusive appearance and a lightweight handset allowing itself to be comfortably cradled against a shoulder. The design was widely used in public telephones for the next fifty years. Now we have iPhones.

Vim, like Dreyfuss and Flinchum, doesn't buy into trends. "This is a dog-dog," Flinchum says. "He wants to be fed, he want to go outside. Sometimes he plays. He doesn't want to be dressed up and he doesn't give a damn about other dogs." When Flinchum takes Vim to a New York City dog run, the pug chooses to focus on building a rapport with the human visitors instead. Flinchum says this has softened him as a design critic. He acknowledges that practitioners aren't happy hearing from a non-practitioner; he tries to be constructive.

"Don't we all want design to be like our dogs?" asks Flinchum. Just like any mass-produced industrial object, dogs are readily available, but each one is special to its owner. "No one ever has ambivalent feelings about their dogs," he explains, "When was the last time you heard someone say, 'My dog is ok; he's not the greatest.' You don't hear that!" He gestures to Vim, who has completed his meal and come to sit three feet from Flinchum. "This is a Pug. What makes him special is to me is my interaction with him. A design should grow on you the same way."

Flinchum originally wanted a Jack Russell Terrier but decided that the high energy-breed would have been too much trouble in a New York City apartment. We pause to consider this. As a Brooklyn-based terrier often taken for a Jack Russell, we have to admit that we are thankful our owner doesn't have a day job. It turns out that, unlike us Fox Terriers, the Pug is perfectly designed for the lifestyle of the overworked owner. Vim waits patiently all day for Flinchum to come home and once he's there Vim doesn't demand too much other than being able to sit nearby. "We're all searching for the dog that meshes with us the best, purebred or mutt," says Flinchum. We wag our tail to this.

We model the skeptical terrier stare.

So, aside from Vim, what design objects does Flinchum hold in high regard? He rattles off a few. There's that blender, a Kyocera chef's knife, and the Fisher Space Pen. Flinchum fumbles in his pocket for a second before tossing this third, pocket-sized aerodynamic item over to us. It should be all black, but instead it's a mottled mix of brass and black. Apparently, Vim chewed on it as a puppy, chipping the finish. But it still works just fine. Durability, indeed.