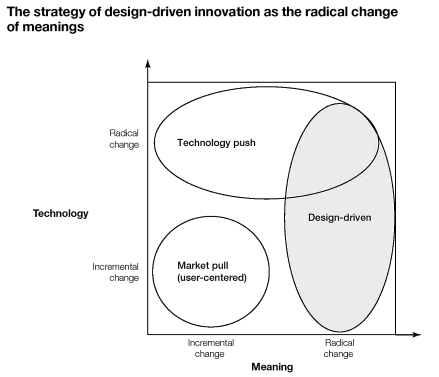 Roberto Verganti: Changing the rules of competition by radically innovating what things mean

Roberto is Professor of Management and innovation at Politecnico di Milano and author of Design-driven Innovation He talked to us about the importance of meaning. Meaning as a way of innovating. First up is an example of a company that looked to innovate a lamp. There have been many lamp redesigns but very quickly these can be copied, most are now on sale in copy form in IKEA. In Roberto's example the company changed it's emphasis and decided to use light to make people feel better. This led them to redesign the whole way light was displayed in a room.

He follows up with the well known example of the Wii reinventing computer gaming away from the virtual and towards the real - real movement, real exercise and real sociability. Another example followed, Fiat have created a post-recessionary car, a small car that can fold down into a bed.

And the common threads between these examples? Each example shown illustrated innovation in meaning rather than just product. People think that they can't reinvent meaning - but Roberto tells us that this just isn't true.

Design in it's very essence is the design of meaning - 'Design is making sense of things' - providing meaning of things.

In the current environment it is essential that we cut costs rather than meaning. Our customers will be cutting costs not meaning. For example if you can't afford a pair of nice leather shoes, you don't buy plastic ones. You're more likely to shift meaning and buy sneakers. Post recession consumers don't want to feel poor. Cut costs not meanings. People want to buy feelings and feel good about their purchases.

Roberto's second point common to all his examples is that radical innovation does not come from users. None of these companies followed a user centred process for innovation. Nintendo didn't use focus groups but they did test and take take feedback.

'Don't get close to the user, get close to interpreters', says Roberto. If you want a better computer don't go to a PC designer. Steve Jobs went to Jonathan Ive because he understood that there was a shift from PC's at work to PC's at home. So Jobs employed someone who understood what was important in design at home. Ive was the interpreter.

And Roberto's parting shots: 'We need designer who keep having visions' and 'You can not encourage sustainability by user centred innovation. Consumer don't want sustainability'.