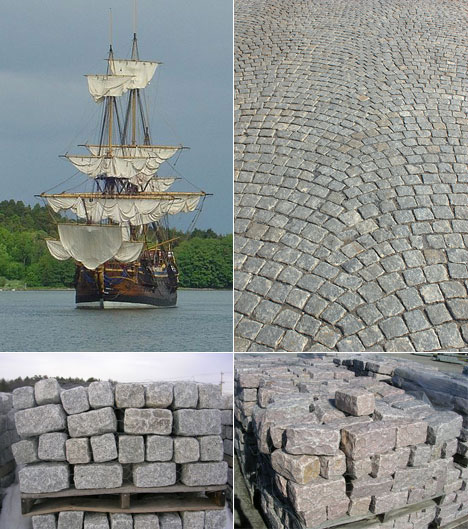 Wooden ships used to set sail from New York fully laden with American goods to bring to the Old World. If the trade balance was perfect, they would unload their stuff in Europe and sail back to America loaded up with an equal amount of European goods; but since more Europeans wanted American resources than vice versa, that wasn't the case.

After unloading in Europe, something was needed to load the empty ships up with for ballast for the return journey. At the time cobblestones were the cheapest, densest, most easily mass-produced and most compact units of weight around, and their squarish shapes made them space-efficient and easy to stack. They became the ballast of choice.

I like to imagine that cobblestones then started piling up around New York docks, after thousands of dockworkers got free, mandatory take-home paperweights. ("What the hell am I supposed to do with this? It's the 1600s and I've never touched a piece of paper in my life.") But most likely some European mentioned to the Americans "Oh by the way, you can make roads out of these bricks. We've been doing it since the 15th century."

The end result is that you can see tons of cobblestone streets in New York, Boston and elsewhere, often close to the water. Cobblestones were holy hell on carriage wheels and they meant horses would have to wear horseshoes, but they had an added technological advantage: In that pre-asphalt and pre-storm-drain era, they allowed water to run between the individual stones, preventing mud build-up and ruts that carts would get stuck in.

Stay tuned for "Shaped by Our Shipping, Part 2: Thinking inside the box."