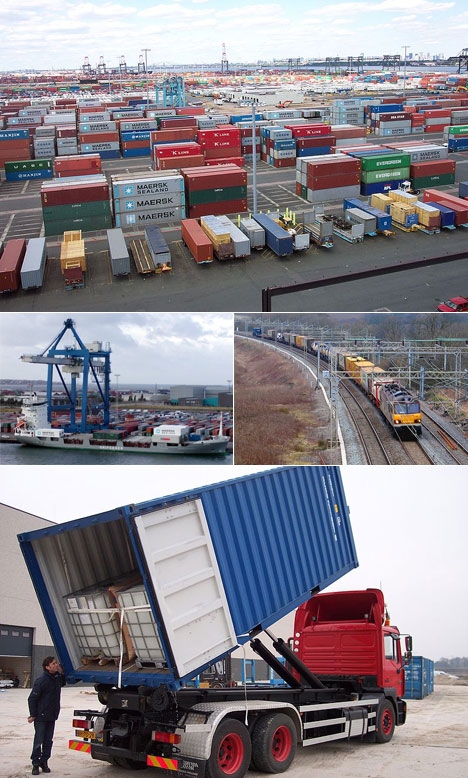 Anyone who's ever moved house knows you've got to put everything in boxes, which is why U-Haul sells them.

Shipping companies figured this out as early as the 1700s; prior to that you had the "break bulk" cargo system, which meant scores of dockworkers going up and down gangplanks with bolts of fabric and sacks and whatnot across their shoulders. But the boxes and crates loaded onto ships (and later trains) differed in size, shape and composition depending on where they came from. Through the 1800s, some were made of wood, others of iron.

In the 20th century, organizations ranging from British railroad consortiums to the U.S. Army all made efforts to standardize their own shipping boxes, but it wasn't until 1956 that an innovation appeared which has taken root around the globe and is still with us today: The invention of the shipping container.

American trucking entrepreneur Malcom McLean came up with what's called "intermodal" shipping containers, that is to say, a box that could be loaded on a ship, train or truck. The cost savings was staggering and sounded the death knell for longshoremen: What once cost $5.86 per ton to load now cost only 16 cents.

Coming up with a standard-sized box might not sound like a big deal, but the intermodal concept was an early success in systems design, something like what Apple does with iPods, iTunes and iMacs. Much of the things in our homes, including the computer I'm typing this on, the monitor you're reading it from, and the chairs we're both sitting in, spent time in McLean's boxes.

(Side note: Entrepreneur McLean, who only had a high school education and starting off pumping gas but later amassed a fortune of $400 million, has a fascinating life story loaded with business lessons too convoluted to encapsulate here--take a look. Said the then-U.S.-Secretary-of-Transportation Norman Mineta upon Mclean's death, "A true giant, Malcom revolutionized the maritime industry in the 20th century. His idea for modernizing the loading and unloading of ships, which was previously conducted in much the same way the ancient Phoenicians did 3,000 years ago, has resulted in much safer and less-expensive transport of goods, faster delivery, and better service. We owe so much to a man of vision, 'the father of containerization,' Malcom P. McLean.")