If you're a Karim fan, a bottled water decrier, or have been closely watching the internet for the past week or so, you've probably seen Bobble, the brand new, self-filtering water container designed by Rashid for Move Collective.

At the Home and Housewares Show (happening now in Chicago), we caught up with founder Richard Smiedt and Karim Rashid at their very first Bobble booth, where guests swarmed for autographed giveaways (yes, we got one). Both took some time out to tell us Bobble's story.

Karim, above, discusses the product from a design and use perspective, pointing out just how much plastic we can really save, and how he's been using Bobble in his own travels. 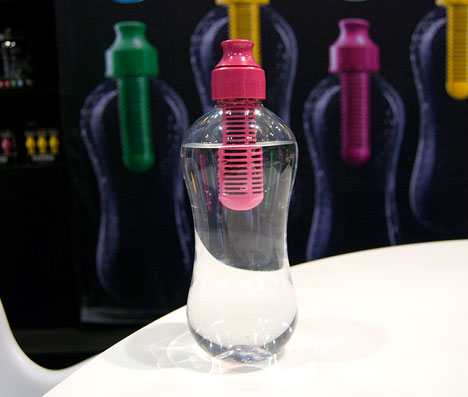 Richard, who came to the US from Australia after working for 20 years in product development at design-centric housewares companies like Casabella, Bodum and Breville, described the Bobble story in depth: with the particular goal of reducing water bottle usage, he and his team unearthed a very buried patent for a bottle-mountable filter; this incredible system had been used in only one crude product thus far.

So now it begins to simplify: as Smiedt put it, they had "found the shell of something quite interesting that had absolutely no design." No design? Hire a designer. Which designer? Karim Rashid, who, as is his way, developed an immediately recognizable form. 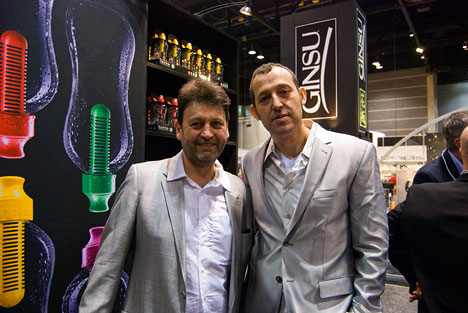 Maybe not so simple: Smiedt described all of the subtleties of design, branding, engineering and product placement that faced his team. Particularly interesting was the challenge of creating a non-beverage (i.e. water container) that will sell in the beverage market (i.e. bottled water). Ideally, Bobble would do well not just at places like Whole Food or Bed, Bath and Beyond, but also at 7-11, where commuters might pick up a replacement filter on the way to work (but only once or twice a year).

To accomplish this, the Bobble team "put products to the people in the same way they like to buy them." Like many disposable beverage bottles (and almost no other water containers), their product is made of PET. The trick is that instead of using as little plastic as possible, they used as much as possible, making something absolutely non-disposable and durable. Balanced with the requirement that the water must be propelled through the filter—yes, Bobble is squeezable—this turns out to be not very much plastic at all. 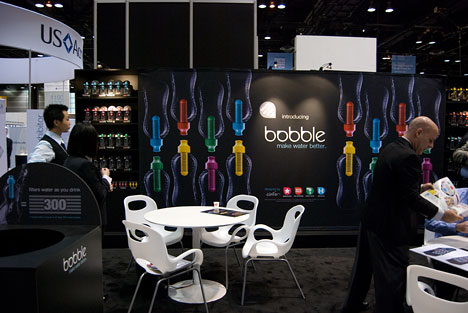 The Bobble booth at the Home and Housewares Show, Chicago, IL.

For the beverage market, two elements were paramount to adoption: conveying a trusted water source and carrying badge value. This is solved by Karim, in the filter. It's both highly visible and comes in interchangeable colors, mirroring other successful, multi-color brands like Vitamin Water and the iPod Nano.

We're excited to see where this goes. As Karim points out, it's not only good for carrying water, it's also good for filtering it.

Bobble is only a few weeks old, but look for it in stores soon or go ahead and buy online.