Home and Housewares Show 2010: hide your valuables in plain sight 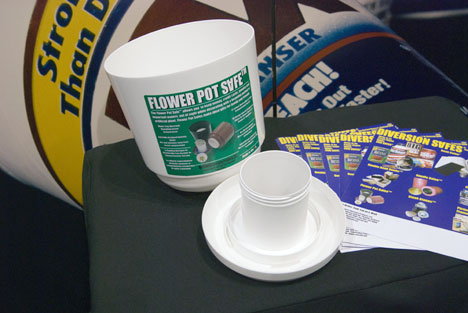 Though it's easy to chalk up the Home and Housewares Show to mostly wandering around overstimulated and disoriented by the thousands of things on display, there's actually (surprise) quite a wealth of information and narrative to be had there. Case in point: we got the guy from Southwest Specialty Products (we love their generic name), who makes the Rock Safe, Flower Pot Safe, Can Safe, CD safe, etc, to start talking about the particular depth of fakery involved.

For example, each Can Safe is a licensed product, made from real cans provided by companies like Ajax and Barbasol. This means that at some point, SSP cut a deal with these corporations to have some of their manufactured cans shipped to them instead of the filling plant. Maybe this isn't so interesting, but to me it hints at a whole world of hidden efficiencies that big companies use to make money before and around retail. And, if the Pepsi brand changes, as it recently did, would that render old can safes obsolete? After all, why would any one have an old can of Pepsi lying around, unopened among new ones? (For the record, I'm not sure that there are any Pepsi Can Safes.)

All that aside, we also learned that Coca-Cola was so proud of the product that they insisted on having different packaging for their version of the Can Safe, featuring only drinks from their own family: 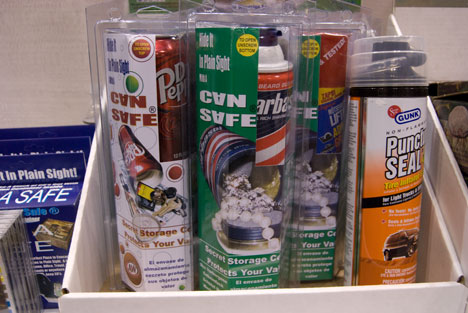 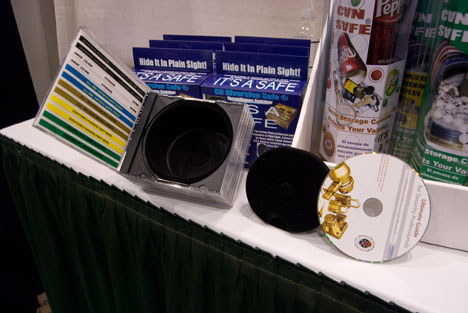 Another interesting one: the CD safe is actually a block of jewel cases, presumably because you can't fit much inside an individual CD. Certainly not any gold nuggets. What's puzzling about the photo above though, is that there is stlll a place to put a CD in the topmost case—this is removed to access the contents. I didn't realize this until later, but if someone takes out the safe enough to have opened it, doesn't the glued-together nature of the jewel cases betray its contents? Why have this extra detail?

My favorite part was the selection of labels for your jewel cases. Fully accommodating everyone's music tastes, a wide range of titles is provided to help the safe blend in with your collection (and yes, Jennifer Spector is real). The owner of Southwestern Specialty Products pointed out that these were not ordinary labels, but specially made from mylar to create the illusion that they were sitting under the plastic of the jewel case, and not on top of it. And also that this was designed one night over dinner. 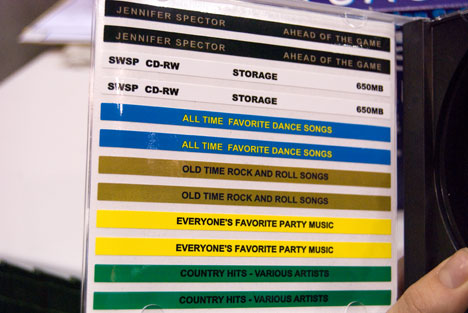 For all the effort, how convincing are these things? At first glance I thought not very, but imagining a room full of Dr. Pepper and Barbasol cans, some real, some fake, it would certainly be very hard to distinguish. Maybe not a bad booth idea for Can Safe's next tradeshow..... 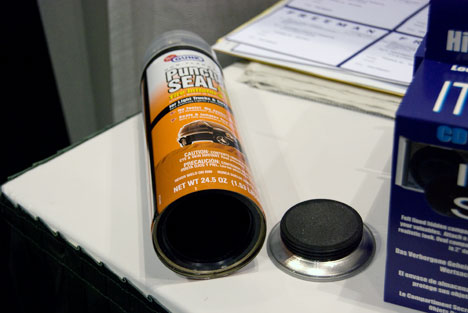