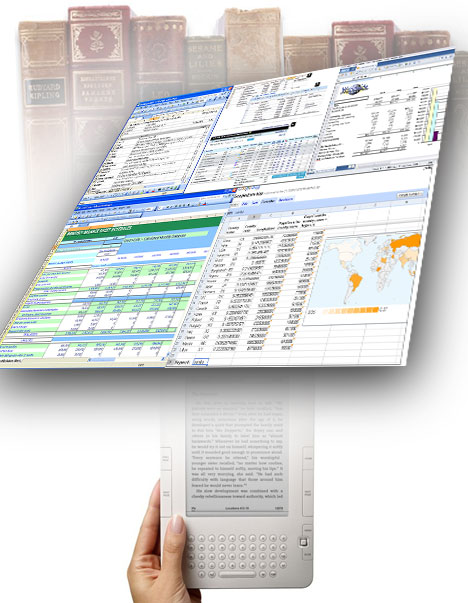 Last month The Economist released a fascinating special report on "data exhaust," or how companies could capitalize on "the detritus of its interactions with its users," at no extra cost, to come up with entirely new products. For example,

Microsoft says it spent several million dollars over 20 years to develop a robust spell-checker for its word-processing program. But Google got its raw material free: its program is based on all the misspellings that users type into a search window and then "correct" by clicking on the right result. With almost 3 billion queries a day, those results soon mount up.

I found it amazing that they can essentially create a smart spellchecker based on harvesting people's typos.

Here's another interesting take on data exhaust, from Music Machinery's Paul Lamere. I read books on my iPhone using the Kindle app, and I never really thought about how the app--like the Kindle itself--actually tracks how, when and what you read. I also never considered that that tracking data might be linked to the internal clocks on these devices. As Lamere points out,

One feature of the Kindle software is called Whispersync. It keeps track of where you are in a book so that if you switch devices (from an iPhone to a Kindle or an iPad or desktop), you can pick up exactly where you left off.... Whispersync is a useful feature for readers, but it is also a goldmine of data for Amazon.

Lamere then points out that Amazon could get creative and use this data to compile all sorts of fascinating lists. Some of his amusing suggestions:

Read Speed - which books/authors/genres have the lowest word-per-minute average reading rate? Do readers of Glenn Beck read faster or slower than readers of Jon Stewart?

Most Abandoned - the books and/or authors that are most frequently left unfinished. What book is the most abandoned book of all time? (My money is on 'A Brief History of Time') A related metric - for any particular book where is it most frequently abandoned? (I've heard of dozens of people who never got past 'The Council of Elrond' chapter in LOTR).

Trophy Books - books that are most frequently purchased, but never actually read.

Biggest Slogs - the books that take the longest to read.

Pageturner - the top books ordered by average number of words read per reading session. Does the average Harry Potter fan read more of the book in one sitting than the average Twilight fan?

Burning the midnight oil - books that keep people up late at night.

I'm so eager to see lists like this that I don't even care about the privacy stuff; if Jeff Bezos knows I like to read from a book of quotations before I go to bed, I'll live. Mostly I'd be curious to see things like what the hot chapters are in Industrial Design: Materials and Manufacturing Guide or any of Donald Norman's stuff.