One of the most interesting creatives we met in Reykjavik was industrial designer, fashion designer and illustrator Sruli Recht, whose true job title is as difficult to define as his origin and his accent; Recht is a product of Israel, Melbourne, London, and now Reykjavik. His influences are similarly eclectic, spanning Futurism, Cyberpunk, Russian Constructivism, and the writings of Phillip K. Dick and Bruce Sterling. 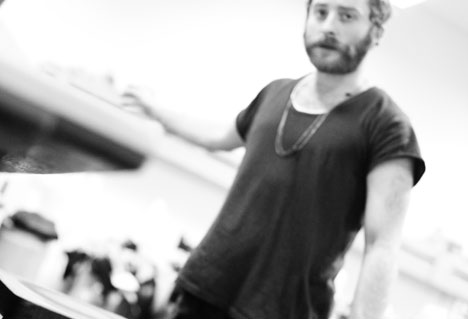 Recht is a champion of what he calls the Non-Product, "a specially-made low-run piece, either hand-tooled or machine-made, that would lose its context as a mass-produced item, and is not viable to produce in large quantities. And/or an item that is in concept stage as a byproduct of the previous," and has keen ideas for what the future of production should be--Recht practices "a more honest approach to production," as he puts it. And his new homebase of Reykjavik comes with its own production idiosyncrasies: Water-jet-cutting and laser-cutting, ordinarily expensive elsewhere, is cheap in Iceland due to its geothermal power, but getting certain types of materials in is logistically impossible. On a typically sunny/cloudy Reykjavik day, Recht invited us into his workshop (a.k.a. "The Armoury") to tell us all about it. 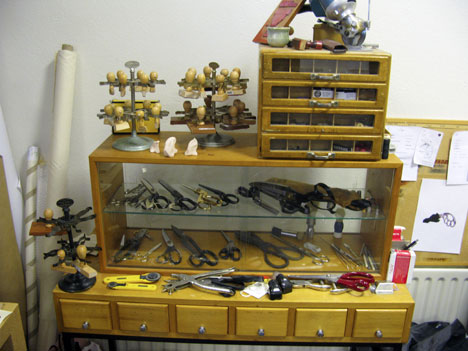 Core77: First off, why is this place called "The Armoury?"

Sruli Recht: An Armoury is a place where arms are manufactured, and a place where items are available for a particular purpose. I liked the irony. The Icelanders don't seem to get it - they really do think we sell weapons, and we have maybe three visitors to the store a day just looking for guns.

Tell us about your "macrobiotic fractal-based production system."

I need to come up with simpler name than that.

This method grew out of the "Non-product" idea - it is the system we use to produce low-run products. Macrobiotic, meaning the intent to use as much locally produced raw material as possible, and fractal meaning we set up a specific model of manufacture that allows the volume of production to be scaled up and down to any amount, irrespective of traditional/standard production minimums.

This means that we can make just one unit and leave minute waste, and also that we can make one unit when we need to instead of having to make a minimum of 50+.This is largely due to the fact that almost all parts of our production come through the studio directly and that we work with other companies willing to scale their operations to suit. So to begin, for anything made out of the studio, a special relationship is created with other businesses that are willing to work to the minimum that we set, be it 5 units/meters or 45/0 - We only make what we need to sell. 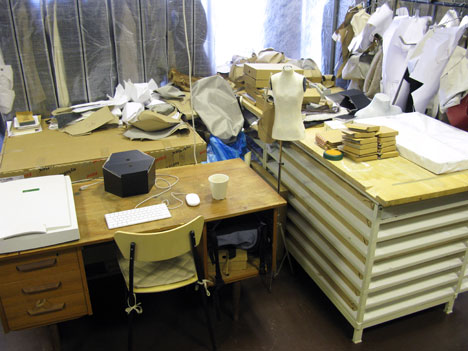 In part this came about by aiming to avoid certain challenges such as the high minimum quantities imposed by production facilities and suppliers, and falling into the trap of working with unethical companies just to lower costs, or having to over-buy materials from suppliers.

You could see it as an attempt to a more honest approach to production. It's a reaction to the waste from overproduction in this world where consequently words like sustainability are now in high rotation. This is about as conscious as your average landlocked business can be and still make a living, short of upcycling.

But these are just names and ideas, not rules. I stick to them as closely as possible, but I won't sabotage an idea because I can't ride the green line 100%. 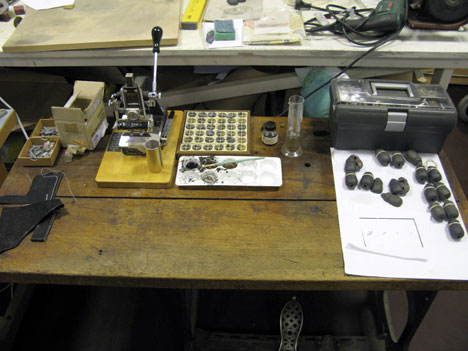 What are some of the materials you use, and why?

Mostly natural occurring materials - wool, cotton, concrete, cardboard, carbon, and now more recently leather from lambs, horses and fish. I use them because they are real. There is such a huge wealth of materials to use that come from the environment. I really enjoy the mix of digitally precise lines in these organic analogue materials. 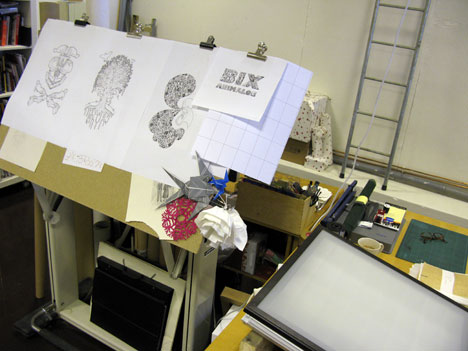 Iceland has a very strange mix of raw materials - the sheep are everywhere, there are three times as many horses as people, we are surrounded by fish and Iceland is the world's foremost tanner of fish skin (in particular the carnivorous pest species of Nile Perch that is destroying Lake Victoria), sea birds, lava stone.... The interesting thing is how accidentally holistic the cycle is here; the sheep are grown, shorn seasonally and every part of it is eaten by people, the face, the genitals, etc., and finally the skin is sent to the tannery. Pets are very few and are a sign of luxury, like in "Do Androids Dream of Electric Sheep," which means livestock is not grown for pet food. The same goes for horses, which are ridden until they die, at which point they are eaten by people and the skins are tanned.... And of course energy. I think energy is one resource I use a lot of. In any other country the cost of water-jet or laser-cutting is super high, but here because of the geothermal power, it is actually much more affordable. It makes more sense than to work it by hand.

This is what there is here that isn't imported, and I like those things. 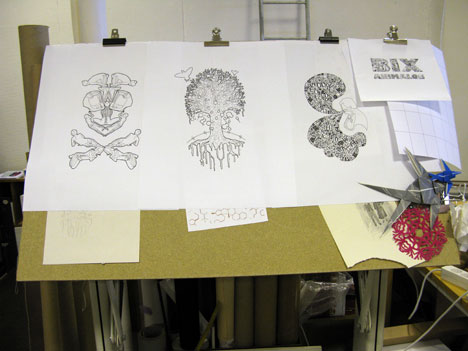 Has being located in Iceland constrained or steered you towards any particular production methods or materials?

Well, they have totally constrained me, but in doing that they pushed ideas that I would never have come up with living in an all-access 24-hour city like New York. It has both steered the production, as I mentioned before, to as local or in-house as possible, as well as forced the focus towards local raw materials. I don't work in Icelandic wool and horse skin only because I like it; it is just that if you want to use anything else you have to import it. Unfortunately the astronomical taxes and protectionism import duties kneecap any new business aiming to produce from imported raw products or components being produced offshore. This is a formula that means that production here is unaffordable, bringing in material or produced items is taxed at a crippling rate, all making resale with profit near impossible. Then come the shipping issues... Protectionism and short-sightedness are killing the opportunity for growth. 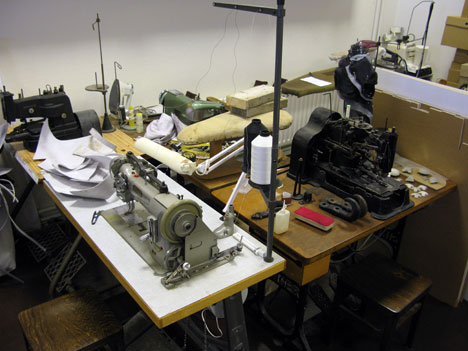 But maybe it is some odd blessing in disguise. Thankfully I really do like working with these materials. I get to work directly with the tanners to produce the skins and the same goes with the knitters.

There are positive and negatives with being here. It is a very small community - the only thing I can liken it too is rural craft quantity production. The great thing is that it is a culture of people who are used to hand-oriented low runs. There is a certain bipolar situation where there are no large-scale manufacturing/production facilities on the island, but there are small factories with industrial production machinery--but the cost of using them is unaffordable due to the monopoly on the equipment and limitations of the man-hours. There are few people to run the operations, but not enough work to run them to capacity. So this means the cost of the machine time is inflated to an exorbitant price. There is also no migrant labour force or historical knowledge base - so labour is then priced at the maximum rate. What this means is that if you want to make anything here you are basically paying retail prices to do production intended for wholesale.

With these constraints in mind, the studio has developed from workshop to small-scale factory itself. It has, in a sense, made me want to localise production almost entirely. I mean on one hand everything is still hand- and machine-made, and on the other hand it is made as I just mentioned, in such a way that it can be produced in high quantity with minimal waste. 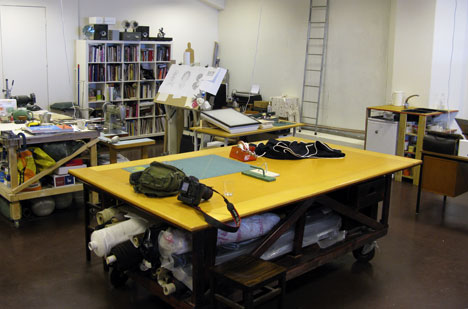 Are there any other Iceland-specific effects on your work?

Since moving here, probably the greatest influence has been the use of the saga in Icelandic culture. Narrative, the story, has always fascinated me, and being here has influenced me to take the story and mix it in with the non-product in such a way that I often wonder [which of the two] my clientele is actually buying.