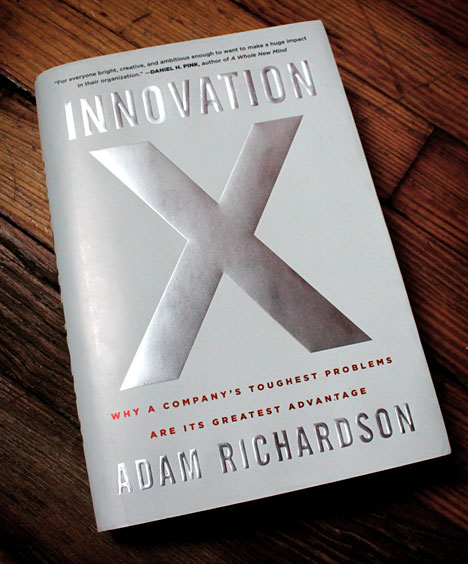 Core77 was lucky enough to interview Frog's Adam Richardson on Sunday, and perhaps the best way to open a review of his new book Innovation X is the quote he closed the interview with. Listen up designers, because, "you've never had a better opportunity in the last 100 years than you have now!"

To put the end of the interview in context, however, we've got to start at the beginning. 2009 brought a huge crop of," Business, meet Design," books, including Frog's founder Hartmut Esslinger's A Fine Line and their competitor Tim Brown's Change by Design. By and large, case-study driven and written in anecdotal style, 2009's business/design books were targeted squarely at management. Those of us in design might find them of interest, but we likely already agreed with the value proposition. Instead of trying to lobby the value of design, Richardson is convinced that most large companies are already sold. Like all revelatory changes, however, this shift brings both good and bad. While both Esslinger and Brown's books entreated businesses to hire people facile in both creative and analytical realms, the front lines of high-end design consulting recognize that day is already here. Hold on to your hats, because even though it's a scant 200 pages, that's where Innovation X beginsSo, with business sold on the merits of design, the future's never looked better for a working designer than now, right? Well, relatively early in the book, Richardson provides an eye popping analogy to America's favorite pastime. In baseball, we no longer see batting averages above .400 (40%), although at the turn of the last century, we did. Times have changed. The late evolutionary biologist Steven Jay Gould posited that the shift wasn't due to some vast improvement on behalf of the pitching coach. Instead, the bell curves representing the performance of the pitcher and that of the hitter have gotten closer and closer together. In the old days, a particularly gifted hitter was often matched up against average pitchers (the opposite was also likely true, but we suspect statisticians are and were more enamored with the highs than the lows). Now, with obsessive Little League parents and the High School World Series, the chances that a mediocre hitter or pitcher will make it to the big time are slim to none. It's far harder to bat 400 because the competition just got better.

For design-oriented businesses, that's the new competitive landscape, which is daunting, but Richardson's willing to hold your hand. As the world becomes more and more networked, not only do changes happen faster, but the environment becomes more complex. Seasoned greenies may have heard the term "Wicked Problem," which has often been applied to global warming. For simple problems, both the problem and the solution are clearly defined. Even if you don't know how to change the oil in your car, you know it can be done. For complex problems, the problem is known, but the solution is unclear, because you know what you need to do, but you don't know how to proceed. Wicked problems, however, are a different class. When neither the solution, nor the problem can be stated, framing the problem is the problem. For everyone trying to determine the next profit-hemorrhaging app, the struggle is not in the mechanics of coding, but in choosing what to build. In this era, where we can build nearly anything, the million dollar question is "what next?"

Richardson takes it one step further, introducing competition into the mix. When racing toward innovation goals, not only is the finish line unclear, but that makes it difficult to assess the progress of your competitors as well. In some cases, as innovation proceeds laterally, even identifying your competitors may be difficult. Richardson coins the problems faced in design strategy "X-Problems," and spends most of the book not solving them, but instead providing a framework from which to attack them.

The first element of the framework should be familiar to most product designers, and certainly to most design researchers: Immersion. For Richardson, immersion means multi-vector research, where teams address customers, trends, competitors, technology and a host of other targets simultaneously. Although it comes later in the book, and in an entirely different section, the best description of the immersion process is given by his colleague Albert Tan, observing that, "focus groups were originally called that because they were intended to focus the research; they were never intended to be the research. No one avenue of research is an end in and of itself. Instead, each vector, as it's explored, shapes and focuses the search for insight in the other vectors. If this all sounds a little vague, each section is capped off with a case study (in deference to the business readers perhaps). For Immersion, the case study involves IPC, a manufacturer of "turrets," which are really just extraordinarily expensive and sophisticated phone banks for Wall Street trading floors. While I'll leave the details for the book, suffice it to say that it provides real world examples of the concerns of different constituencies and demonstrates how a real product can be improved not only by addressing the end-user, but also strategic positioning.

The second section, convergence, is where it gets tricky. While it seems as though convergence would be harder for smaller firms, the major takeaway is that convergence doesn't' require a combined entity like GE-Westinghouse, um, -Toshiba. Instead, convergence can be capitalized even if your company doesn't service all end markets. Niche players can still become players on the converged landscape. Instead, convergence is about the customer journey. It works for companies like Apple (although Richardson has the good graces not to mention them as a case study), or even for a hard-drive company like Maxtor (which is a case study). Once Maxtor realized that the hard drive wasn't the product, but instead that data storage affects even facets of the customer's social life, they were able to position their product by seamlessly integrating it into their customers' lives, instead of fixating on technical specs.

Richardson goes a bit dialectic with his next section, divergence, which is really about product lifecycle management on the sales side. He views the declining portion of the S-curve as opportunity for finding lateral spaces to move into. While he can't solve the X-Problem of lateral competition, he can give you the toolkit to be a lateral competitor yourself.

Divergence dovetails nicely into a discussion of adaptation, the final prong of the X framwork. We finally get a negative case study (which are often neglected in business books), learning about the history of the Motorola Razr, where Motorola failed to capitalize on their stylish product, but also misread the customer base, who had grown to appreciate a well designed GUI. As that example illustrates, every one of these avenues is tied into the others. Motorola's loss in the end was due to a failure to adapt, but had they done a multi-vector analysis rather than closed off focus groups, they might have seen the tides changing. Likewise, an awareness of the convergence of the phone market into the user experience game that is smartphones, they would have known that flashy shells weren't going to cut it in the oughts.

There sad answer, design reader, is that there are no short cuts. Much like Alice in Wonderland's Red Queen, who had to run at breakneck pace to stand still, business has to adopt an evolutionary metaphor. Even the Red Queen needed to move from paper to screen and now on to 3D. Suddenly the strategy for an Innovation X company starts looking like the strategy of a tree. Indeed, Ricahrdson even observes, "Plant seeds, not forests," and "practice wasteful innovation." From an evolutionary perspective, a failed mutation doesn't get to propagate, but business can pick and choose its battles. Even though New Coke failed, it united the company with its customers in appreciation of its original product. Rather than an evolutionary dead end, a minor failed product is simply a scar, and a lesson learned. Gone are the days of Harley Earle, where one man dictates what should be popular for the people. Maybe Anna Wintour still has the juice, but for the rest of us, culture's gone viral. An Innovation X world can't be manhandled, can't be forced into submission and can't be prepared for. An organization planning to tackle X problems, however, can build a culture of preparedness. The good news, alluded to in the beginning, isn't that life will be a cakewalk for designers in the future, but instead that we'll be at the center of the maelstrom ... and that's just the place to be.