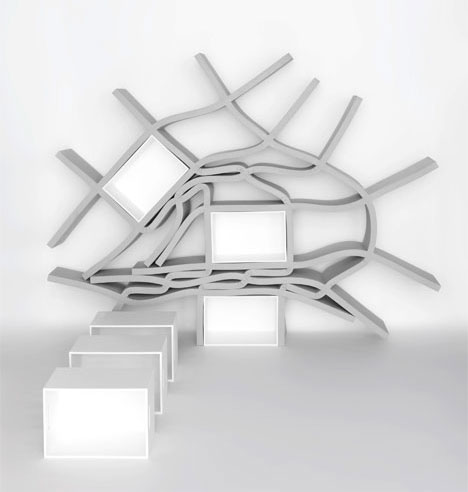 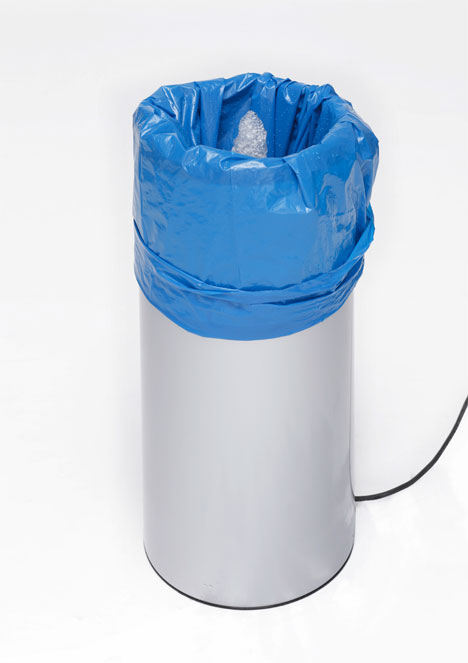 Kkarrlls is a new collection of limited edition pieces produced by students and faculty from the Karlsruhe University of Arts and Design in Germany. They launched their first editions last year at the Milan Furniture Fair and continue with their second&mdahshwe discovered it by chance on our way to 5.5.

According to the show's introductory essay, the designers behind the collection are unified "in their basis in an entirely and extremely unconventional design approach," with ideas stemming from "an absolutely unprejudiced view of the world of objects and its coherence." This is not an uncommon claim, true (and not true) of many designers who exhibited in Milan this year. But, to their credit, the Kkkarrlls collection held together very well, with equal amounts of strangeness and familiarity.

Take, for instance, one of our favorite pieces of the show, Fontana Adria by Felicitas Wetzel, made from a steel waste-bin, trash bag, and pump. Though a bit heavy-handed as a critical object (commenting on environmental technologies and azure paradises), it mixes banality with surprise to produce an original effect. 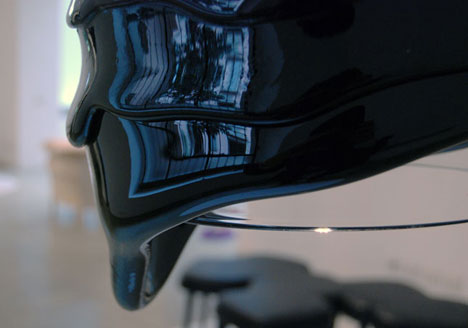 Also striking were Laura Jungmann's experiments with tar. Her F0fm10s collection explores the material properties of tar at different temperatures. In her ceiling lamp, a swath of tar slowly drips down the side of a glass vessel, creating an "aesthetically long-lived object."

Tom Powlofsky's Zinfandel shelf was another favorite: by inserting plastic boxes into a foam mesh, a storage shelf is created, resting on the mounds formed by its soft structure.

Many more projects from Kkaarrlls after the jump, and pics of the show too! 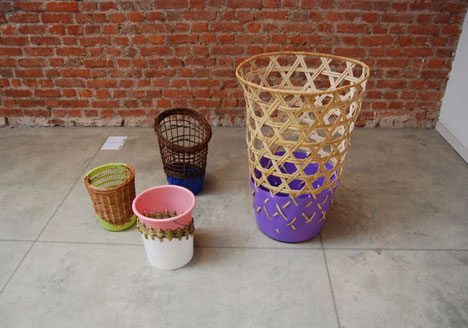 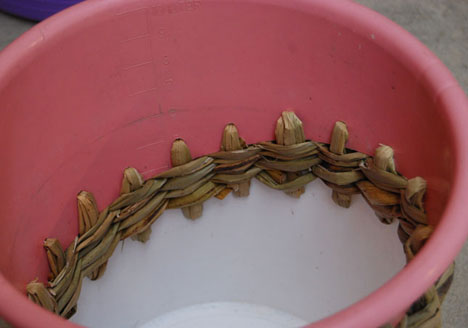 Plastic buckets, bowls, and tubs usually end up on the waste disposal site -- at least when they start to leak or show other kinds of damage. For Cordula Kehrer, however, these rudimentary remnants of plastic culture are inspiration as much as a starting point for her designs. Kehrer does not only Â«repairÂ» these remnants, she puts these mass-produced and synthetic utensils in contrast to an absolutely different culture of materials and production. She completes the pieces she finds with wickerwork from willow, rush, or rattan. In doing so, she not only creates new aesthetics, but also avoids all forms of material dogmatism. 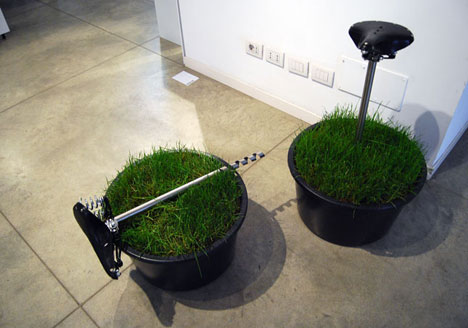 It actually seems reasonable to use the bicycle saddle, a sitting device that can, in the widest sense, be classified as seating furniture, as a piece of furniture and thus beyond its singular function in sports. This indeed has already been suggested by Castiglioni Sella in 1957 or Ron Arad's Puch Stool in the early 1980s. Contrary to their approach of changing the saddle into a stool by equipping it with a new substructure, Anna Brugger leaves it in its setting. She only changes the seat post by milling it into a spiral so that the saddle can be more easily "screwed into" hard-packed soil or sand. Thus right where pedalers are only too willing to take a rest! 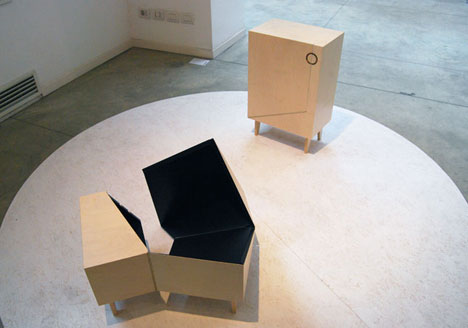 As a descendant of the chest, the chest of drawers stems from an originally mobile piece of storing furniture. The fact that it could be opened and accessed from the front made it quite convenient. Backed up against the wall -- deprived of their mobility -- they have since been populating hallways and bedrooms. Swiftly, all sorts of small lamps and vases, and even doilies, found their place on them and degraded the piece of furniture to a presentation pedestal for the props of our life. The Immobile rebels against such comfortable superficiality and gives up its familiar form in favor of a new order. It pushes its original function of providing mobile storage space back to the forefront and challenges users to involve themselves anew with their furniture. 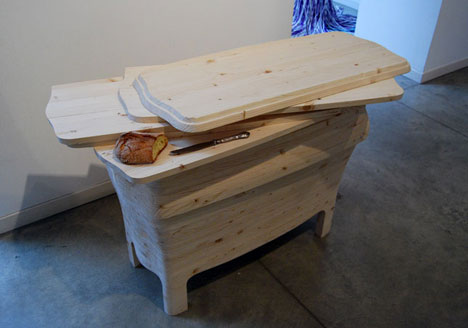 Pl(a)ywood is, obviously, a play on words -- but not just that. Silvia KnÃ¼ppel's chest of drawers, Pl(a)ywood, allows, or rather requires, you to use it in quite a playful manner. Like the material it is named after, this chest of drawers indeed consists of a total of 38 layers of loosely stacked plywood boards. Consequently, only the shape of this piece of furniture reminds us of a traditional chest of drawers, when in fact the chest as such does not have any inner workings -- at least not in the form of hollow spaces like drawers or closet compartments. Yet it is not only a massive wood sculpture. After all, the layers can be shifted against each other and one below the other, thus offering numerous possibilities for placing things: the boards can, as needed, be left to protrude to the side, to the front, to the back and somehow also diagonally. These protruding surfaces can then be used to hold books, glasses, bottles, or other small items. 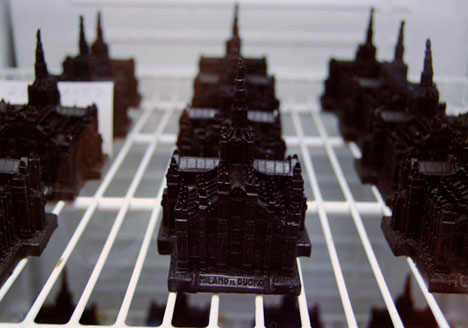 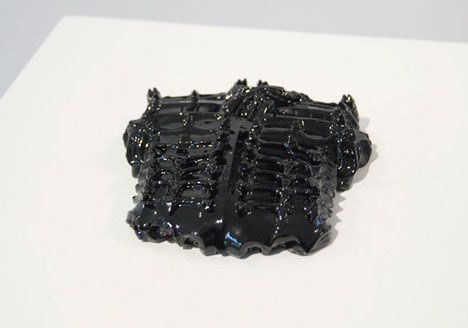 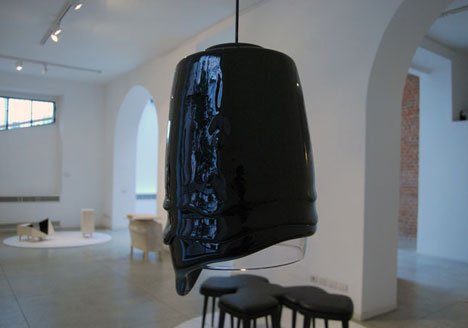 Zeitgeist demands that we always stay current. New trends and tendencies are being declared at ever shorter intervals and confirmed by corresponding novelties. As a consequence, the aesthetic half-life of many products labeled as design items tends towards zero; they become outdated at increasingly shorter cycles. By using bitumen, a rather unusual material for product design, Laura Jungmann draws our attention to a material which, thanks to its properties, is completely removed from the fate of up-to-the-minute style because it is constantly changing. At room temperature, its flow is inexorable and uncontrollable. Rigid, defined bodies thus lose their form and become unique and consequently aesthetically long-lived objects. 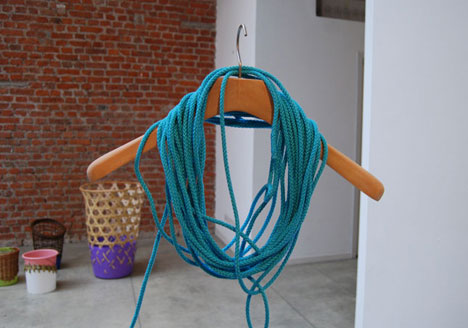 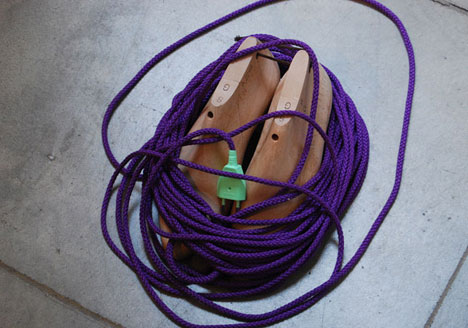 As the title Â«Chauffage LainierÂ» (Heating from Wool) implies, this object is a heating element, albeit an extremely unconventional one. The heating element used here is actually an electric blanket containing 20 meters of heating tube. A six-loop tube knit from cotton knitting yarn forms the covering for the heating tube extracted from the electric blanket. The blanket as such is not included, and consequently the restrictions of use imposed by the form of a blanket are removed. In return, the resulting ball of wool provides a host of possible new uses (scarf, cushion, etc.). In short, it offers up pliant heat for every wish. 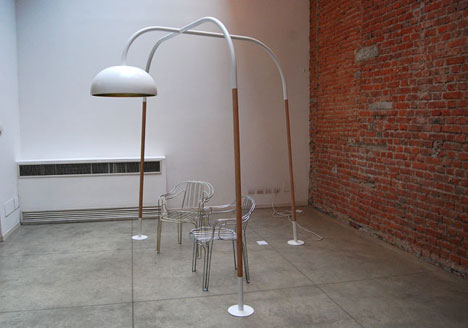 A light is a pergola is a light! Kilian Schindler's floor/ceiling lamp may have been influenced by Castiglioni's ingenious Arco, but the designer must have been at least as much inspired by the typology of the pergola. This light is doubtlessly a kind of crossover between various mobile and more or less immobile design and architectural categories: a floor lamp, a ceiling lamp, but also a breezy pergola. 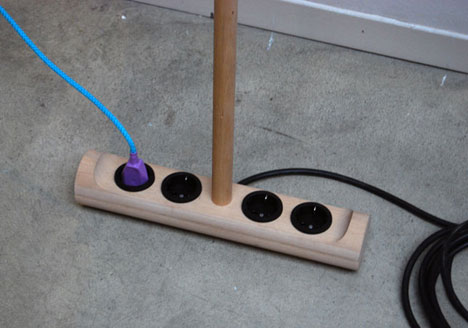 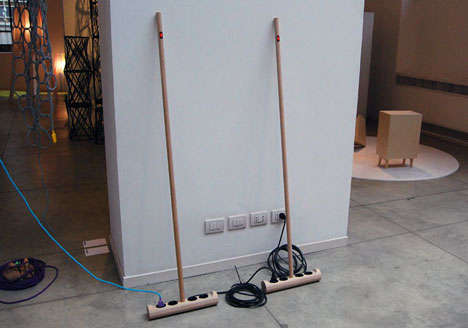 We couldn't find this piece in the press release, but we love the concept! 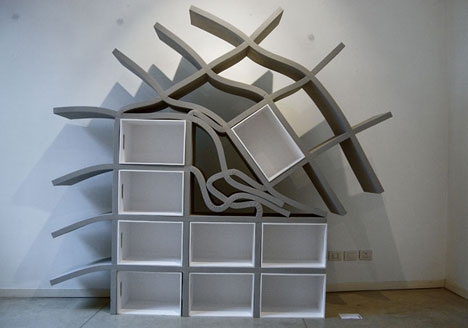 With his Â«shelfÂ» Zinfandel Tom Pawlofsky confronts us with a fundamentally new definition of the concept of a shelf. Up to now, we had always thought of shelves as stationary storage devices. Independent of structure and stylistic differences, we thus imagine this piece of furniture as a permanently installed structure, or at least as a fixed entity. Relocating this piece of furniture means either disassembling it completely -- all the way down to the screws! -- or lugging the entire, heavy, bulky thing in one piece from A to B. 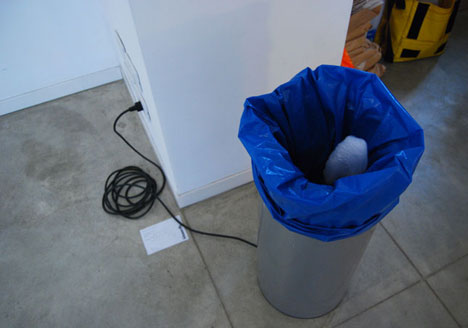 With the indoor water fountain Fontana Adria, Felicitas Wetzel cultivates a rather sober if not downright fatalistic view of the supposed azure paradise. For many of us, the Mediterranean coastal landscape is certainly still the epitome of summer holiday dreams, but far too often, reports on construction sites, mass tourism, and overbooking cast a cloud over this fiction. Thank God, the situation is not yet entirely down the drain, as this rather smugly critical object also shows. If you use appropriate (environmentally) friendly technologies correctly, the water always bubbles clear and clean -- which is, after all, exactly what matters.