Every once in a while a designer will come across somthing ugly and feel the need to do something about it. So it was with Squarespace Creative Director Tyler Thompson, who late last year found himself aesthetically offended by the mess that is a Delta Airlines boarding pass. 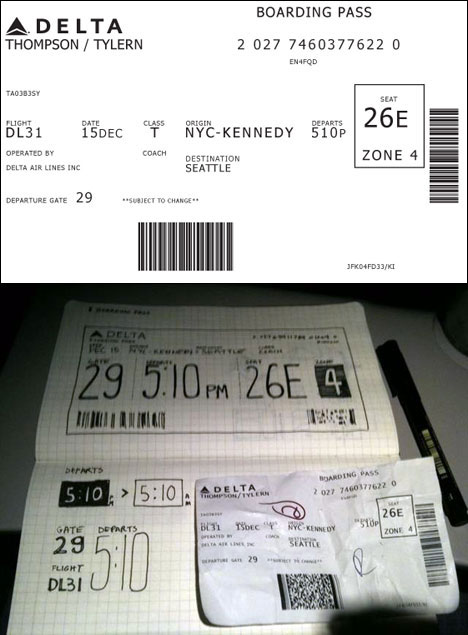 So I took out my Moleskine and started sketching. I tried to remember my previous trip through John F. Kennedy Airport and when and why I needed to reference my boarding pass. It seemed like I first needed to know which flight I was on. I put the gate right next to this, but made the flight number first because gates tend to change quite often. Next came my seat which I always look at a few times while boarding the plane. After that I put the zone, which is how they board the airplane initially and always seemed like the biggest cluster-fuck of people not knowing what zone they were in or how to find it on their pass. I also did something with the time I think might help, when it was a P.M. time, it was white text on a black box and when it was A.M. it was black text on a white box. Below is what I initially came up with.

Then came a colored variant:

What was fascinating was that other designers, upon reading Thompson's entry, started to pile on with their own re-designs. Check 'em out here.