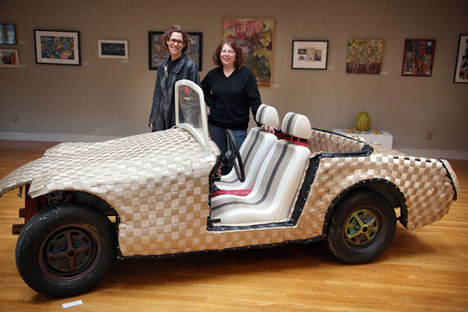 Seinfeld used to do a bit about how the Black Box was the only indestructible part of an airplane, a design oversight in his estimation. "Why don't they just make the entire plane out of the Black Box?"

The closest you'll ever get to seeing such a thing is a car made out of seatbelts, or at least skinned in them. Artists Ann Conte and Jeanne Wiley covered an MG Midget in a weave of overstock seatbelt material and crafted seats made of Corian donated by DuPont, among other tricks:

[The Woven Car is made from] recycled and overstock materials, including pale gold seatbelts that were woven to create a checkerboard pattern around the body of the car, and 500 yards of webbing that was adhered to the shape of the car. The car's stick shift is a bouquet of hollow ceramic flowers that were created by dipping live flowers in paper clay. The flowers were evaporated in the heat of the kiln, leaving a shell that was glazed. The tail lights are also ceramic, featuring 60s-inspired orange, yellow and red prints.

The resultant Woven Car is part of Massachusetts' South Shore Art Center's Media Mix exhibit and will also be on display at Chicago's GreenBuild 2010 later this year.