Spreading systems design expertise around: I want to fly the friendly skies with Apple's iTravel 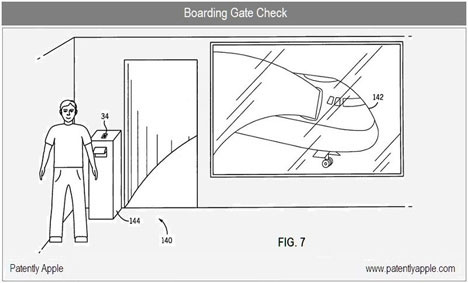 Yesterday we wrote about BMW DesignWorksUSA lending (okay, selling) some of their design expertise to Embraer for a new line of jets. And earlier this week on "V" Anna decided to share their Blue Energy technology with the humans, so even bloodthirsty lizard aliens are into the design collaboration thing.

In short, I like the thought of companies (or super-hot aliens) that have a track record of getting things right sharing that knowledge to improve situations outside of their original arena of influence.

One business grossly in need of help are airlines. I'm not talking about the volcano thing, I mean the crappy check-in process. Yes it's a miracle we're able to fly places at all, but there's no reason this process couldn't be made more pleasant by a little studious application of technology by people who know what the hell they're doing. And in this instance, I mean Apple.

Yes, Apple. They tend to get things right, and they make what could easily be frustrating experiences easy and intuitive. They design products that don't really need instruction manuals by putting careful thought into their processes. And just so you don't think I'm crazy, Apple's been thinking about airlines too. 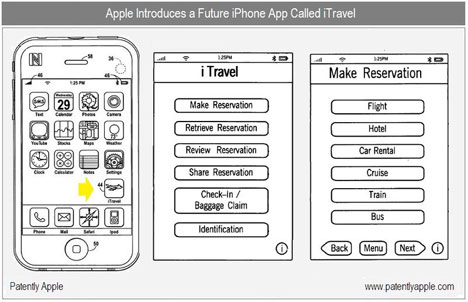 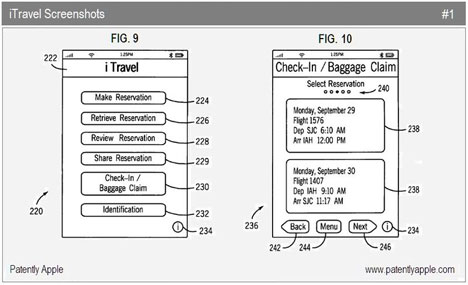 Someone over at the Patently Apple fan website has taken a lot of time to go through an Apple patent filed this month and uncover drawings for an Apple iPhone app called iTravel, which would handle ticket-buying, electronic check-in, car rentals, and perhaps even integrate airport kiosks of Apple's own designs (that last part is speculation based on my limited understanding of patent applications). 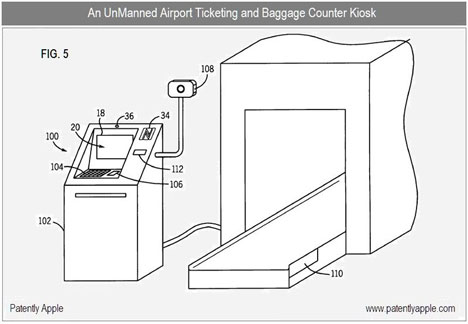 Yes, electronic check-in already exists, and no, it's not a seamless process. In contrast the Apple patent throws out some cool ideas like using your cell phone camera to snap a shot of your computer screen, and having OCR technology turn that photograph into a useable boarding pass on your phone. It would also be possible to purchase tickets from within your phone itself (which is possible now, but the iTravel app would presumably make it much easier). That information could then be read by an unmanned kiosk at the airport which would speed passenger time at checkpoints in some unspecified way. 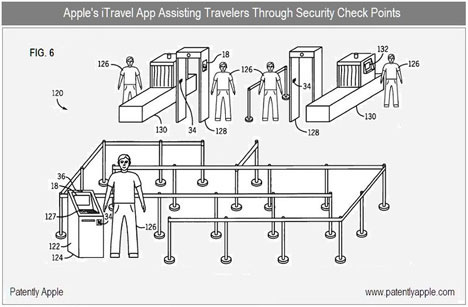 Am I bothered by the "unspecified" part? Not at all, because like I said, I trust Apple to get it right, or at least get it better than anyone else had it. This is the most exciting thing I've read about Apple that wasn't left in a bar by a drunken engineer.

Check out the drawings for yourself and let us know what you think.

Lastly, the Patently Apple writer points out one amusing fact: In one of the patent drawings, the carrier for a particular flight is listed as "Apple Airlines." I bet you they'd have free on-board wi-fi.

Spreading systems design expertise around: I want to fly the friendly skies with Apple's iTravel