Everything in Moderation: Reflections on Furniture, Volcanoes, Design, Social Change, and the "Museum"

I experienced an extraordinary triplet of events this past week: It started out at the Bellagio Center, the Rockefeller Foundation's beyond-scenic lake-and-hilltop estate, then onto the annual Salone Del Mobile Furniture Fair in Milan, then through the bizarre machinations of being stuck in Europe (yes, I know, there are "worse places to be stuck than Milan"), hostage to the whims of the volcano, its ashes, and the various European airspace agencies. But for me, events happened in a different order. In what I can only describe as a bizarre bookending of things, the furniture fair was on one end, the volcano one the other, and in the middle, the Bellagio Design Symposium. Let me try to explain.

It's already been remarked that if Eyjafjallajokull didn't exactly co-opt the fair, it at least provided its leitmotif (see Craig Berman's picture perfect cartoons here and here). Certainly by Salone's last couple of days, the expression on people's faces (well, of the North Americans' and northern Europeans' anyway) was one of distress and fatigue; many wondered when, or if, they would be able to get home. I met several people with family back home, and even a married couple both marooned in Italy with two kids "back in the U.S. with the grandparents." Everyone tried to keep a positive outlook (there's the first "moderation" from my title), but rumors of a "second eruption" and the infamous larger "sister volcano"—which has allegedly erupted every single time Eyja's gone up—peppered every conversation. It was fascinating (and disheartening) to see the size of the story shrinking in the newspapers day by day, starting out as a huge, paper-spanning headline, then two column widths, then one, then a large box, then a small one. And it was humbling to see that this story, like all others, ran its news cycle, then faded.

The reason things flipped in my mind, I think, stems from the theme of the Bellagio event: "Reasons Not to Be Pretty: Symposium on Design, Social Change and the 'Museum'." The event was produced by Winterhouse, with support from the Rockefeller Foundation, and here we were to discuss the notion of design for social change, its various forms and manifestations, and how best to exhibit, acquire, and preserve its artifacts in museum and non-museum contexts. And we certainly tried to cover all that, but the concentrated discussions on design and social change—all the amazing examples of life-affirming, impact-making, enterprises of design—provided the beating heart of the event, pumping oxygen (and belief) through the discursive circulatory system of the attendees and into our collective thoughts. We were immersed in the proactive, good-intensions of design (some called them "do-goody"), and by the end of the conference, we were walking around in the positive, world-changing glow of design and its seemingly-limitless powers.

Leaving the two-and-a-half day Bellagio event then and driving down into the Milan Furniture Fair was like walking through Platform 9¾'s brick wall in a Harry Potter novel. The Fair is not without its "critical design" provocations of course, but traveling out to the Fiera fairgrounds—as I did my first afternoon—shoved me through the most extraordinary shift in design matter. There was just so...much...stuff. Beautiful, well-designed, witty, often rich in content, spectacularly lit, and again, abundant, stuff. I felt an urgent necessity to reorient my compass; to try to be in the present, to switch gears from design-for-social-change to some of the other vectors of design endeavor—to form, to materiality, to commentary, to aesthetics and wonder and just plain silliness. But I have to say that for those first few hours, it just seemed so over-the-top. So immoderate. I was privileged to be the moderator of the Bellagio event, and I confess to being occupied as much with infrastructure, videotaping!, finicky coffee machines, and group dynamics as I was with content. But the full-on immersion into the topic of social change, its evidence and its display, made for an incredibly fulfilling time. I believe all (well hopefully most) of the attendees had a similar experience; just the luxury of being secluded away with the sole pursuit of wandering the intellectual hallways and anterooms of the topic was such a...well, pleasure. (I did my moderator-best not to let that slide into indulgence. Well, maybe once or twice.) Several people described the event to me as a "mental holiday," only interrupted by reports of a prevailing ash cloud. Cue volcano.

For the symposium content, 4 themes provided the grist. The first, Storytelling, asked participants to consider "Creative Approaches to Exhibiting Design and Social change." The second focused on Content: "Adapting the Message of Social Change to Multiple Venues and Platforms." The third theme dove into Form: "Acquiring and Preserving the Artifacts of Social Change," and the fourth reflected on Content: "Key Issues and themes for Future Exhibitions and Platforms." We worked hard to center the program on actionable, relevant questions, and provided bullet-point provocations inside each of the themes.

On the first evening, Paola Antonelli, design curator at MoMA, offered what I called a Dessert Keynote (she affectionately bristled at the word "keynote"), launching the proceedings and generously allowing her talk to mutate into a free-for-all roundtable discussion that got everyone pretty excited about the next two days of sessions. We tried to vary the conference programming, gathering as a whole (there were only 21 of us), working in break-out groups, and continuing residual (or initiating emergent) discussions during mealtimes. One of the highlights was the "dinner with the scholars," where, en-masse, we trudged up the hill to the scholars' dining room and ate and drank with a fascinating group of Rockefeller visiting scholars—each engaged in a 28-day pursuit of topics ranging from symphonies based on windup music boxes to albinism. (I was at a table with Cath Le Couteur, co-founder of the remarkable Shooting People independent filmmaker online community.) Another high point was a casual "in-town" dinner, nestled down in Bellagio itself, a postcard-quaint village plump with cafes, gelato emporia, and pizza-and-pasta restaurants. 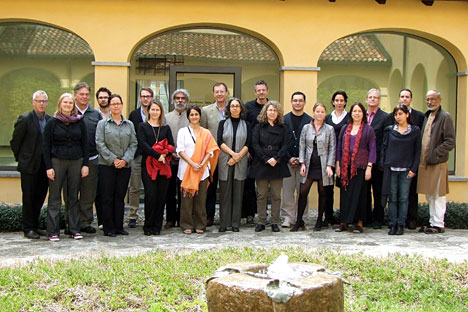 Of course, the real highlights of the conference were its exceptional group of attendees: The aforementioned Paola Antonelli from MoMA, Andrew Blauvelt, chief of audience engagement and communications and curator of architecture and design at the Walker Art Center, Adélia Borges, design curator and writer in São Paulo, Brazil, Nadine Botha, editor of Design Indaba magazine, Ashoke Chatterjee, past director of India's National Institute of Design in Ahmedabad, William Drenttel, partner at Winterhouse, Galit Gaon, creative director of Design Museum Holon and the founder, director and chief curator of the Israeli Cartoon Museum, Jamer Hunt, Director of interdisciplinary Graduate Initiatives at Parsons The New School for Design, Niels Jarler, curator of the INDEX:Award Exhibition, Julie Lasky, editor of Change Observer (and official notetaker of the symposium—thank you Julie), Jeremy Myerson, director of the Royal College of Art's Helen Hamlyn Centre in London, Alex Newson, curator of design at the Design Museum in London, Jogi Panghaal, researcher, practitioner and design teacher across India, Jimena Acosta Romero, an independent curator in Mexico City, Kiran Bir Sethi, founder of the Riverside School in Ahmedabad, India, Cynthia Smith, curator of socially responsible design at the Cooper-Hewitt, National Design Museum, John Thackara, symposiarch and founder/director of Doors of Perception, Paul Thompson, rector of the Royal College of Art in London, Els Van der Plas, director of the Prince Claus Fund for Culture and Development in The Hague, and Jane Withers, London-based design consultant, curator and writer. This was an incredible group of individuals, and I cannot express the privilege I felt to be a part of the conversation.

Julie Lasky will be writing up a comprehensive summary of the event proceedings in the coming weeks [here's the link: http://bit.ly/bvNMlJ]I'll provide a link here when it's posted), but some of the most resonant discussions clustered around language and normative differences. Several attendees talked about "Design AS social change" (arguing for amping up the humanistic pursuits of the endeavor), or, in its ultimate distillation, "Design IS social change" (maintaining that any design act is fundamentally a political act, influencing behavior, sticking a finger into culture, and introducing new forms and interactions). In sidebar, hallway chats, it was remarkable how many participants remarked on the varying perspectives of what a museum's mandates and priories were. (Here, the participation of attendees from Brazil, India, Mexico, Israel, Europe and the US provide a nice diversity of perspectives.)

The symposium ended not with a manifesto or a mission statement (though I confess I should have known better than to engage the collective in such a pursuit!); rather, we pledged as a group to work together to create several artifacts aimed at contributing to the methodologies, articulation, and display of design for social change. Both evidence- and process-based, these initiatives will attempt to put something meaningful into the world, act as connective tissue between the participants (beyond exchanging email addresses), and lay a base for possible larger, future interventions.

I'm on the plane heading back home now, writing this and reading an Economist article about the latest techniques for searching for extraterrestrials. The piece explores how classic strategies like looking for deliberate or errant radio waves from distant civilizations might be wrong-headed, since radio waves "may be only a transient sign of civilization." (Even we humans have moved on to fiber optics and "spread spectrum" encoding in only a century.) Instead, the article reports, some astronomers and scientists suggest looking for pollution, or chlorofluorocarbons "which would be unequivocal signs of technology, since no natural process on Earth creates them." But perhaps the most optimistic smoking gun would be so-called Dyson Spheres, "giant, ring-like structures" constructed by a civilization around its planet's central star, designed as a kind of energy collector, concentrator, and generator.

I like that last image, for my precious time at Bellagio, mentally sandwiched between the all-out Furniture Fair and the humbling volcano. It's an image with arms spread wide, aspirational, literally full of energy and light, circling around, finite yet unbounded. It's sentimental, I know, but we don't have to be moderate about everything.

Thank you to Bill and Julie for extending the invitation, and to all the participants for their generous, candid, and inspired participation.