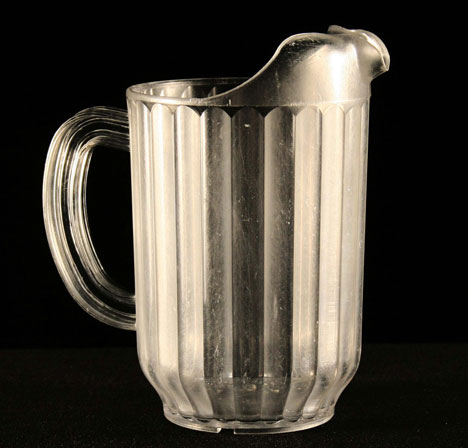 That's your standard plastic water pitcher used in restaurants worldwide, and as a former waiter I can say its design sucks. Waiters often carry three of them in one hand by putting the handles together, but though this is an established practice, the handles were not designed for such and don't align neatly; when fully laden, any unexpected starts and stops--such as when moving through a crowded restaurant--may cause one of the pitchers to slip and jostle, splashing its contents on you or worse, a short-tempered diner.

More importantly it's not good at the very thing it was designed for: Pouring. You can always tell which of your friends has worked in a restaurant by the way they handle one of these pitchers--if loaded up with a beverage containing ice, they will always pour out of the side of the pitcher, not the poorly-designed spout, because ice gets jammed in the spout like cars going in the Holland Tunnel and eventually causes a spill. And even if you pour ice-free liquid from the spout, if you do it too quickly the liquid will overwhelm the spout and come spilling out around it. I spent eight years working in restaurants and had problems with this pitcher design up until my last month.

I've found a lot of kitchen implements have not changed much since their very invention. If you dug up an artifact from a thousand years ago that someone used to boil water, it would be recognizable as a pot. The metal may have changed, and the materials of pitchers may have evolved from ceramics to glass to plastic, but the overall shapes and functionality remain much the same. 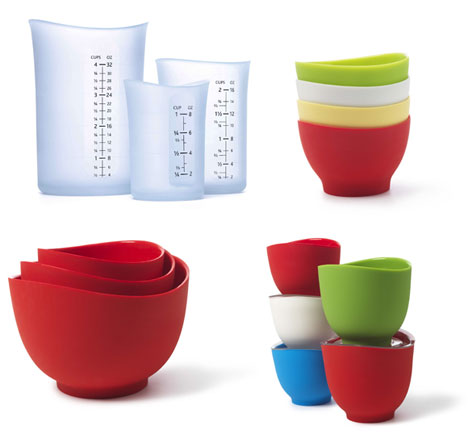 While the shapes are the same, the key difference is the material: Made from silicone, the Flex-It vessels can change their shape and allow you to make your own spout.

The flexible mixing bowls, measuring cups and random containers come in handy in all sorts of ways, as you'll want to pour something with the viscosity of pancake batter at a different rate than you'd pour straight liquid, olive oil or dry grains of rice. 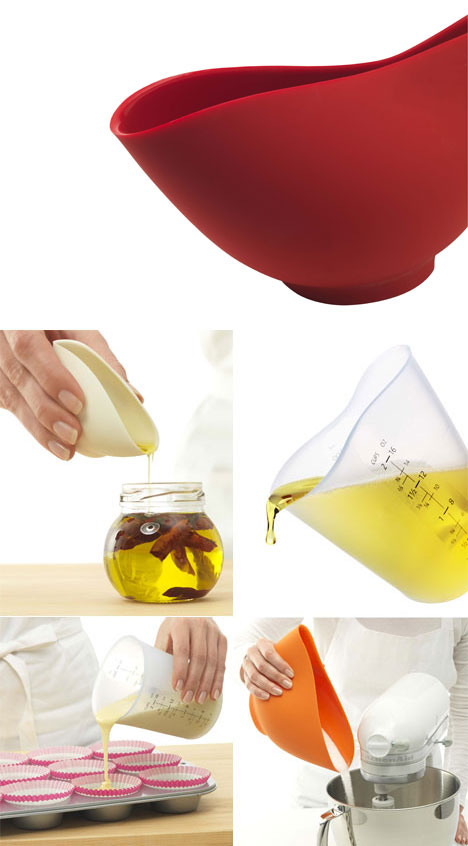 Lastly, the stuff cleans up easily, and though I've not had cause to use them in this way, the silicone material makes it heat-resistant up to 475 degrees. Once you use these things, you'll never want to go back to using fixed-shape mixing bowls, prep bowls and measuring cups.