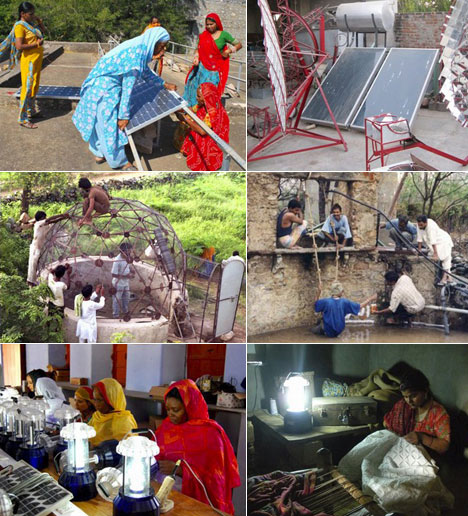 Buckminster Fuller would be proud. The annual challenge held in his name is not some pie-in-the-sky design competition where the slickest rendering wins; instead the Buckminster Fuller Challenge seeks "workable solution[s] to one of the world's most significant challenges such as water scarcity, food supply, and energy consumption." 215 entrants from around the world threw their hats into the ring this year, and competition was reportedly stiff.

After much deliberation six finalists were chosen by a distinguished 11-member jury including Cores fave John Thackara, Metropolis E-in-C Susan Szenasy, Earth University President Jose Zaglul and others. Said BFI Exec Director Elizabeth Thompson, "Strong themes emerged from this year's pool involving issues around urban agriculture and the built environment, disaster recovery and transition, community engagement and global ecology, and smart business strategies tied to creative use of technology to improve quality of life in the most impoverished parts of the world."

The six finalists are as follows:

Barefoot Women Solar Engineers of Africa, Asia and Latin America (Tilonia, Rajasthan, India) Training women in remote towns and villages to solar electrify their own communities and to be the ongoing resident solar engineers, thereby catalyzing the local economy and improving quality of life.

Call to Farm: FarmShare (Brooklyn, NY, US) FarmShare reconnects farmers and consumers as co-producers of the foodscape using urban backyards and an online social network. This is a leading model in the emerging urban agricultural movement.

Eco-Boulevards (Chicago, IL, US) This remedy re-conceives the Chicago street-grid as a holistic Bio-System that captures, cleans and returns wastewater and storm-water to the Lakes. This model could be instrumental in how cities around one of the largest bodies of fresh water operate as mindful gatekeepers of a critical resource.

Living Building Challenge (Seattle, WA, US) One of, if not the most, comprehensive set of design and performance based standards related to the built environment. Their purpose is to effect a paradigm shift in our entire approach to the buildings we design, construct, renovate and occupy and to serve as a catalyst for innovation.

Watergy Greenhouse (Berlin, Germany) This project is refining a closed system greenhouse that provides extremely efficient farming capabilities in water-scarce communities. It will allow a dramatic shift in resource efficiency for the supply of water, food and renewable material and can be deployed across urban and rural conditions.

The winner will be revealed at a ceremony in Washington DC on June 2nd, 2010 at the National Press Club and will be awarded $100,000 in prize money to honor and encourage further development of their work.