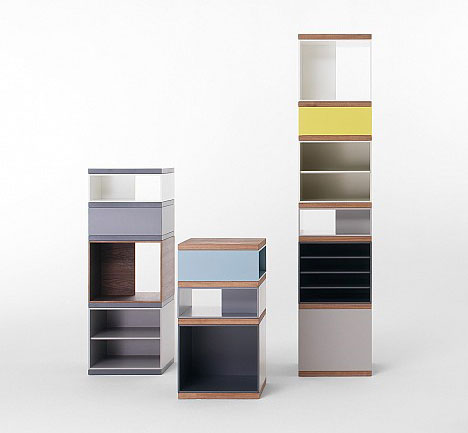 In 1913, a Dutch businessman named Frits Loeb decided he was going to make his own chairs for his shop in Utrecht. His first five years were so successful that he moved to a larger factory, and from 1918 until today that factory has grown to become the UMS Pastoe Furniture Company.

In addition to chairs and tables they produce a beautiful series of cupboards that caught our eye:

And we especially love their Horizontals model, with the sideways-sliding faces.

Equally impressive is the company's philosophy. They have reached nearly 100 years of operation by gradually evolving a sort of laconic and confident style:

During its more than 95 years of existence, Pastoe has learned that slavishly reacting to the latest trends in the market is as nothing compared with the careful and measured evolution of a furniture collection.... For us, innovation is never merely cosmetic, but it's the next step in refining technologies, enhancing functionality and improving visual and material longevity. Pastoe is fully aware of how valuable history is in responding to the questions the future holds.

Our key role in the development of Dutch design has always been characterised by sober minimalism. And logical innovation. The very simplicity of our storage units, tables, chairs and seating elements is a response to the need to marry quality with neutrality. Furniture with real character, unafraid to reveal itself without the need for extravagance. Furniture of few words.

Check out the rest of their stuff here.