We will miss you, Tobias Wong 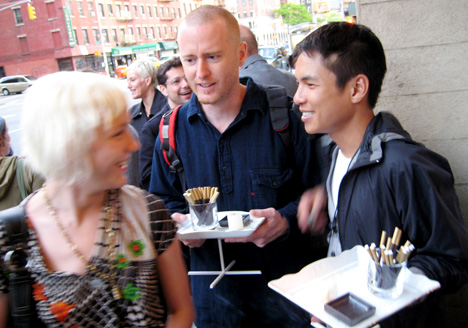 Tobias Wong, right, celebrating outside The Wrong Store in 2007

The design world lost a dear friend early Sunday morning with the passing of D. Tobias Wong, whose wit and daring will be terribly missed, and whose design provocations provided a consistent touchpoint throughout much of the last decade.

I remember meeting Tobi more than a decade ago on the corner of Prince and Mercer in SoHo, an eager graduate from Cooper Union set up behind a stool adorned with a corrugated box on top, filled with his now famous vials of silver leaf capsules amidst assorted other design gestures. We chatted for just a few minutes that afternoon, and I remember walking away with a particular delight, sure that we would be seeing a lot more of Tobi's work in the years to come.

Favorites were his Andy Warhol print wrapping caper at TROY for the holidays, where customers could have their purchase wrapped in an actual Andy Warhol screenprint for an additional $5000 ("...we got very close with one customer," Tobi recounted when it was all done); The Wrong Store, when he never broke character when asked what the hours of the store were —I was behind on my coverage and needed to be sure the place would be open when I arrived (it never opened, of course); the Killer Diamond Ring; and his storied stunt at Core77's Offsite event, Design Wit and the Creative Act, moderated by Ze Frank. Here, Tobi elected to have a stand-in for himself on the panel and for the Q&A session—the skillful Rama Chorpash—with whom Tobi rehearsed tirelessly to prepare both the presentation (as Tobi would have given it), as well as the panel discussion talking points. Tobi sat in the audience, inconspicuous, taking it all in with a smile on his face. Even some of the panelists didn't get the decoy (Tobi's face hasn't been design-star plastered in the media), and one attendee drove down from Toronto to meet his idol (we arranged a secret—and genuine—get-together during the cocktail hour).

Well, there are too many great pieces of work to mention, but we also like this remark from a short interview with Core77 back in 2002: "Leaving room for meaning is a cheap cop-out—the best designers/artists have always been focused on what and how they want to be read. Leaving room for meaning is for those not so confident with their ideas." Nice.

Aric Chen has written a moving release, with a beautiful summation of Tobi's career:

Through his work, Wong helped bring forth much of what is now taken for granted in contemporary culture. Influenced by Dada and, especially, Fluxus, he questioned authorship through appropriation; held a mirror to our desires and absurdities; upended the hierarchy between design and art, and the precious and the banal; and helped redefine collaboration and curation as creative practices. Working within what he termed a "paraconceptual" framework, Wong prompted a reevaluation of everything we thought we knew about design: its production, its psychological resonance, its aesthetic criteria, its means of distribution, its attachment to provenance, its contextualization and its manner of presentation. Wong was a keen observer, an original mind, a brilliant prankster, and an unerring friend.

Tobi Wong's work was widely exhibited, including at MoMA, Cooper-Hewitt, Colette, Prada, and more, and he was named Young Designer of the Year by Wallpaper* magazine (2004) as well as the Brooklyn Museum of Art (2006).

Core77 would like to extend our heartfelt condolences to Tobi's family and to Tim Dubitsky. Tobias Wong was a bright spot for us all, and his work will continue to inspire countless designers, artists, students and friends. He left us too soon, at 35 years of age.