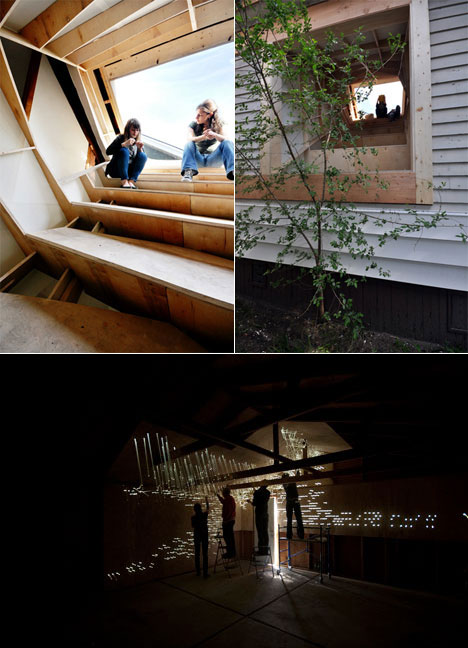 About-Face by Rosalyne Shieh and Weatherizing by Catie Newell.

It's no secret that houses can be acquired for cheap in Detroit—as low as $500 if you attend the Wayne County Tax Foreclosure Auction. With property so easy to acquire, a new question surfaces: what should be done with them? Many are dilapidated from disuse, burnt-out with no plumbing or electrical wiring to speak of, despite being located in partially occupied neighborhoods. Prior 'cheap-house' projects have made polemical, visual statements that call out the urban blight in Detroit. Five teaching/research fellows from the University of Michigan's Architecture Department have approached their $500 house a little differently, using it as a testing ground for their ideas about architecture and domestic space.

The house was purchased at the above-mentioned Wayne County Auction, and is located near Hamtramck, in the same neighborhood that community-focused Design99 built their recently blogged Neighborhood Machine. Over the past year, Ellie Abrons, Meredith Miller, Thomas Moran, Catie Newell, and Rosalyne Shieh have been rehabilitating the property, rewiring it for electricity and investing in new windows, for example. At the same time, they've tested their own ideas about new ways to experience and occupy this house, building them right into the existing architecture, reflected in the title of the project: Five Fellows: Full Scale. Now that their fellowships are over and the project is complete, the deed has been turned over to Design99 for further development and use. 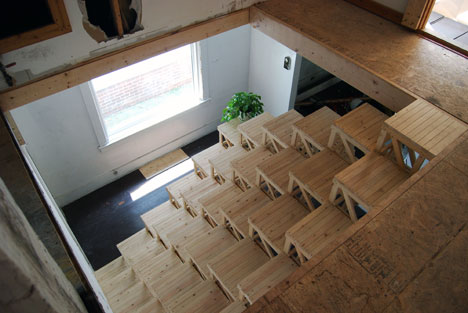 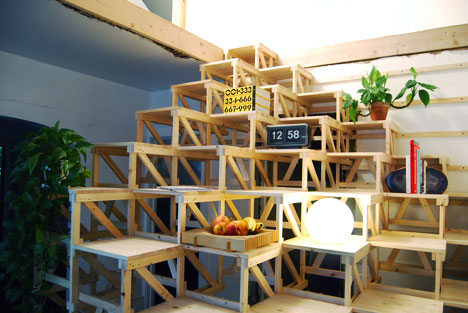 Above, see Thom Moran's Table and Chairs, built to give the house a new staircase (in addition to the old one in the bathroom). It's room-like in scale, and its steps double as seating surfaces and shelving. The direct making technique suggests that there are interesting building opportunities even with basic tools and skills.

This project intends to provide the house with its missing staircase. The bleacher-like quality of the stair makes it a space to move through but also a place to linger. Something between a shelf and a ladder, the form of the stair can serve as permanent home for plants or a temporary place for a book or a drink. The stair is designed to be realized with minimal means. Not the "capital M" minimalism of art history, but the more immediate minimalism of survivalists, home depot and the typical apartment dweller's toolbox. Inspired by Enzo Mari's Autoprogettazione (roughly translated, it means "self-made" or "self-designed"), the stair is constructed with only cheap 1x2 boards and nails. It is something anyone can make with a saw, hammer and nails. This frankness and simplicity in making, initially a response to the lack of infrastructure (like electricity) in many Detroit homes, is more about practicality than polemics. Rather than offering a critique of contemporary techniques of making, the "lo-fi" quality of this project explores the opportunities of the primitive as an optimistic act. 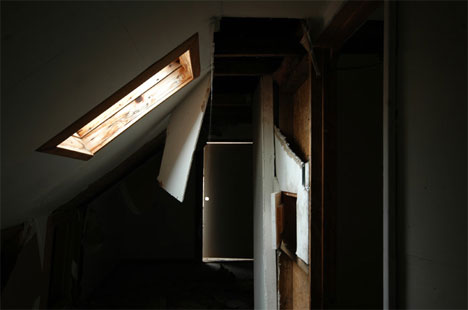 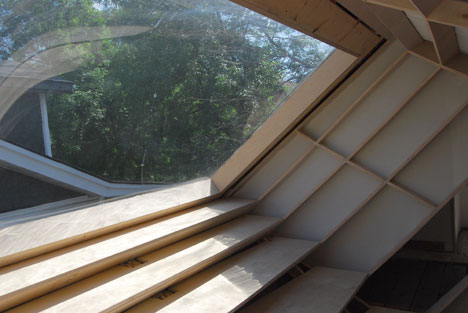 Rosalyne Shieh's About-Face room, and the upstairs space before she and Thom built out their projects.

Rosalyne Shieh built a diagonal room that cuts across the entire house, from roof to outer wall. The space is topped by a window bubble, creating a space for sitting and enjoying the light. Her project is entitled About-Face.

This project is a room that cuts diagonally across the house, with a window onto the southern sky. The room cuts a path for light, bringing a spot of brightness into the northern easement corridor during the day, and illuminating a volume between the house and its neighbor at night. This new cross-axis anticipates the removal of the adjacent, fire-damaged property, readying the house to turn away from the street and face down a more distant neighbor across an open lot. The construction of contrast in light and aspect between the house and its immediate surroundings invests in a transformation of the entire block. 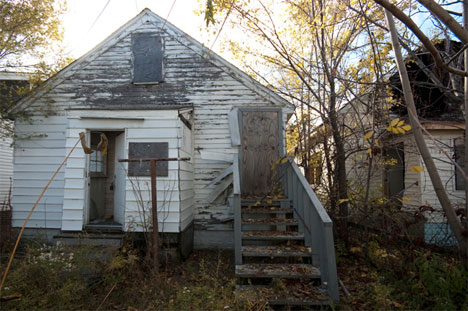 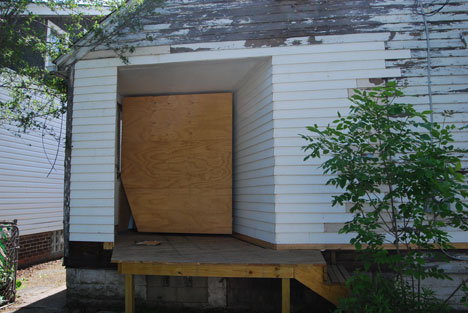 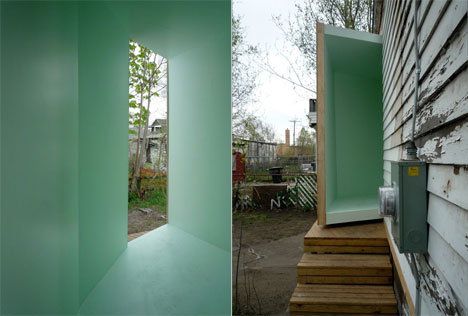 The back of the house, before and after the installation of Meredith Miller's R.O. security door.

Meredith Miller explored security, turning the back door into a mobile room that opens and closes the house as it slides. The project is called R. O.

The alteration to a single-family house inserts a third space between its private and public domains by reformatting access. The nested perimeters of the single-family house - property lines, windows and entrances, wall assemblies, infrastructural connections, security systems - form migrating boundaries that are both materially defined and programmatically activated. Amplified by the proliferation of unwanted properties in Detroit, the negotiated status of these boundaries provides an opportunity for architectural intervention. At the back facade of the house, an operable piece moves between two positions to secure the interior and to create an entry from the exterior. Each position forms new relationships within this evolving residential landscape, such that its movement tracks the (sometimes competing) desires of openness and security, privacy and access. 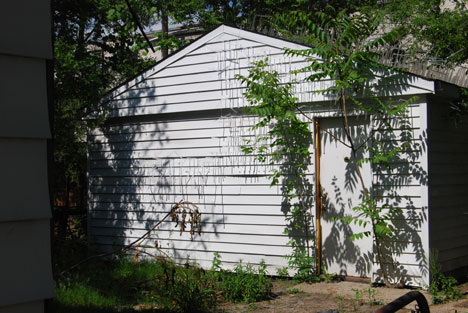 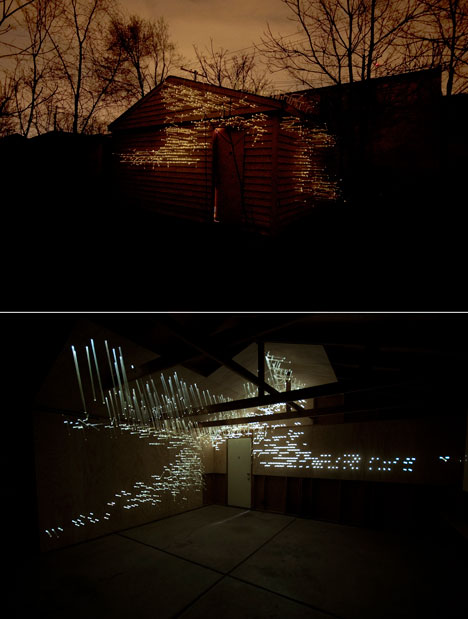 Catie Newell punctured the garage with a wash of tubes made from lab glass.

Catie Newell used the garage for Weatherizing, puncturing the walls with glass tubes to soften the barrier between the indoors and outdoors, creating a membrane that admits weather, light and sound.

As a material study and electrical experimentation, this project mutates and activates the barrier between the atmospheres of the interior, and the greater surroundings on the exterior. As a replacement of the common flat-pane windows, the project utilizes the typical mediator of glass in an unusual configuration allowing for an altered understanding of volume and exchange. Comprised of nearly one thousand glass tubes, the project spatializes and amplifies light conditions, both natural and artificial, and the flow of air. Varying in length and bends, the aggregation of the glass tubes works as a material substrate upon which energy is captured in the form of a glow and passes through a collection of hollow channels conduits for air and precipitation. Mysterious and moody, reliant on the immediate qualities of the atmosphere, the luminosity becomes an eerie registration of the seemingly intangible surrounds and a foil to the once apathetic barrier. 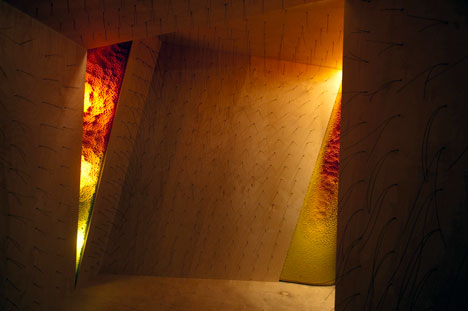 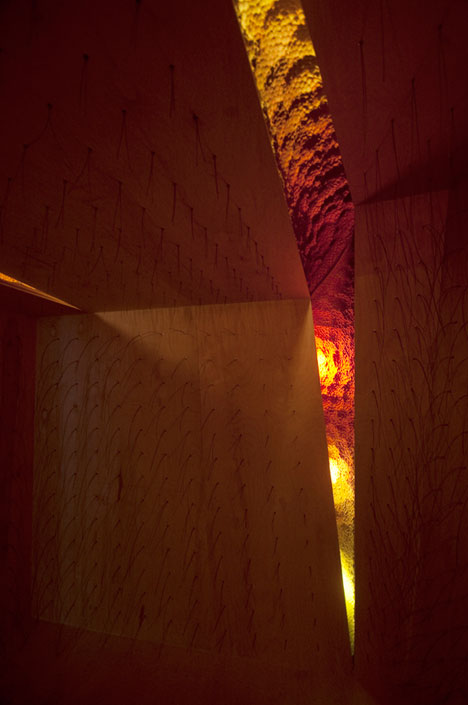 Predominately governed by efficiency, maximization, and building standards, the architectural liner (floor, ceiling, and wall) is most often built as a thin, taught surface. Its standardization produces a blankness which is then adorned with window dressings, paint colors, and personal artifacts. This project challenges this thin surface by transforming it into a deep volume, unlocking a space within the thickness of the wall, and ultimately moving architecture from blank backdrop to active participant. Each layer in this new material mixture is pulled from the palette of standard building materials and exploited for its latent textural qualities. Materials are carved, painted, smothered or otherwise manipulated in order to extend their possible qualitative effects. The excessive layering of exaggerated textures provokes engagement, but this engagement cannot be perceived instantaneously - it unfolds in time, as multiple patterns fade in and out of focus yielding an experience that vacillates between the realms of the haptic, the visual, and the conceptual. 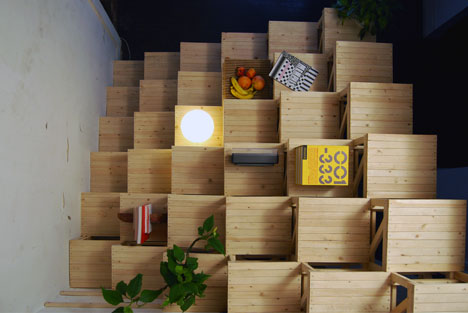 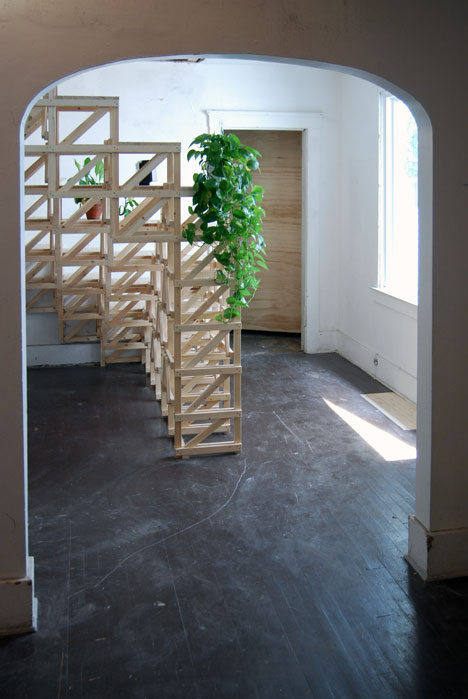 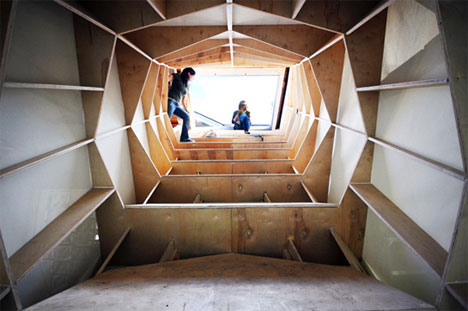 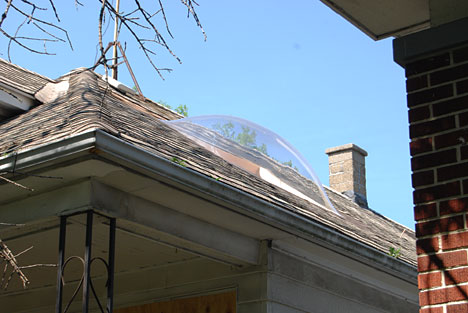 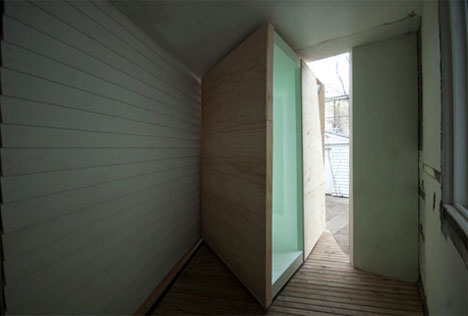 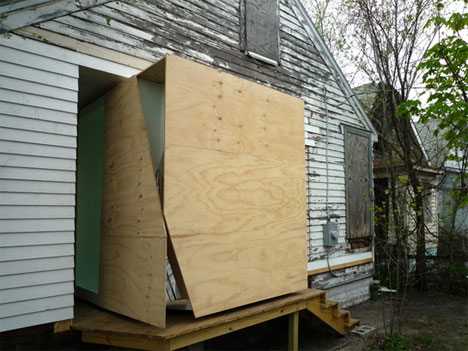 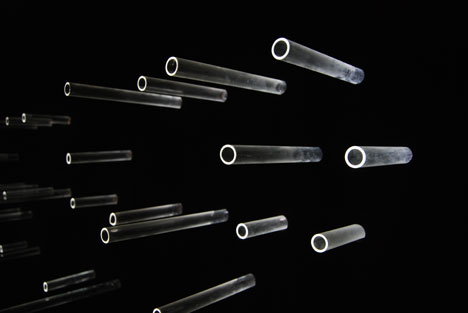 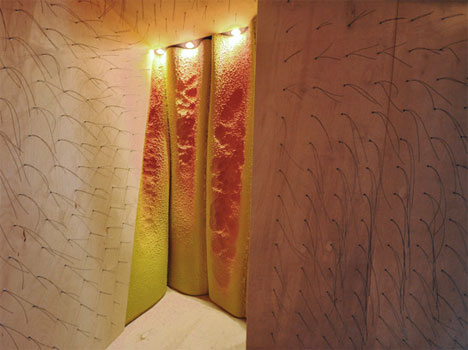 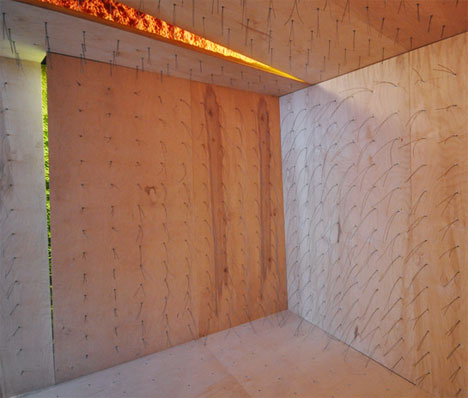