A closer look at the Jabulani, part 1 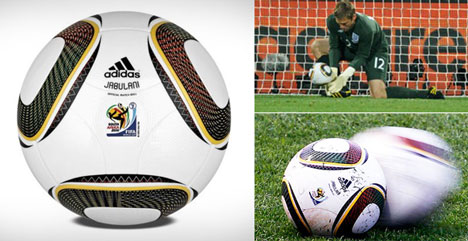 It just didn't make sense, no matter what angle the replay was viewed from: The U.S.'s Clint Dempsey turns one way, then the other, and kicks the ball directly into English goaltender Robert Green's gloves. Green seems to stop the ball, then it somehow bounces off of him, spins, and continues the way it was headed had Green not been there--into the goal. If the next frame was an earlier shot of Dempsey in the parking lot of the stadium signing a contract with a big red guy with horns, I would not at all have been surprised.

Much has been made of the funny behavior of Adidas' new Jabulani ball, and while Green himself has not blamed the ball for his inexplicable error, others have. What's different about this ball is that it's made with only eight panels--down from 2006's 14 panels--and it's covered in tiny bumps and grooves that reportedly make it more stable in flight. Detractors claim that this, or some unseen design feature, makes it move erratically.

In our previous post we covered soccer balls over the last 30-something years. The nice thing about covering a recent ball like the Jabulani is that unlike, say, the 1966 Slazenger, there exist plenty of video clips discussing and explaining the design of the ball.

Lastly, Hans-Peter Nurnberg briefly touches on the all-weather capabilities of the ball:

It should be pointed out that all of these videos were recorded pre-controversy, and we've yet to see Adidas directly addressing its recent critics in video form. We'll be on the lookout for such a video (unless they release it during a match, in which case we'll pay it not the slightest of attention). In the meantime, we hope Green can come to grips with--ooh, bad choice of words.

A closer look at the Jabulani, part 1