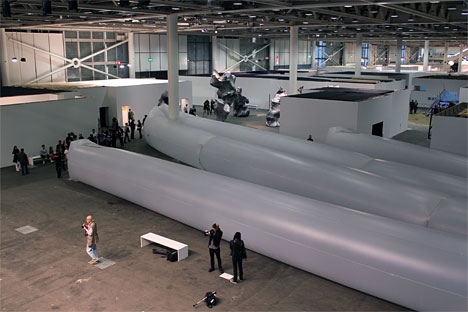 Your curiosity is piqued as you wait in front of the 140-meter-long PVC zigzag tube, curious. When your turn arrives, you squeeze yourself through the tight slit in the plastic. You feel claustrophobic, not sure you want to continue. After you get your breath back, you find yourself inside a long wide corridor and realized that you have completely lost your sense of orientation and space.

Sergio Prego, a Spanish artist, has created 'Ikurriña Quarter', a pneumatic membrane sculpture that transforms public pathways and, at the same time, changes the viewer's perception of immediate environment. 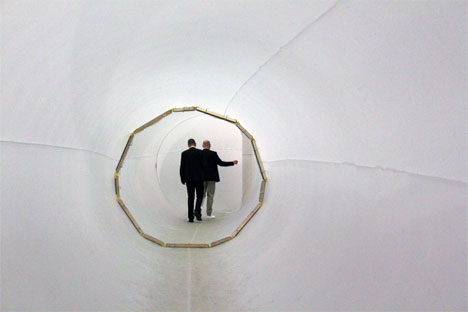 Prego's piece can be experienced both inside and outisde.

This unique piece is part of Art Unlimited, the XXL pieces section that has become one of the most visited and praised parts of Art Basel since it was first hosted in 2000. The strength and originality of the exposed works, organized as if this was a museum and not a commercial fair, bring this venue even closer to the most important biennales in the world.

Prego's creation is one among many pieces made with very cheap material this year. According to the curator of the exhibition, Simon Lamunière, "it is a coincidence and it doesn't have anything to do with the economic context we are experiencing now." In fact, 'Laberinto e Grande Pozzo' (1969) by Michelangelo Pistoletto is also exhibited. A few decades old, this massive installation is made of corrugated cardboard and plays with bewilderment and displacement. 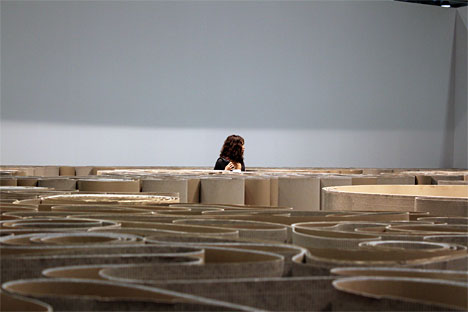 Michaelangelo Pistoletto made this corrugated carboard labyrinth in 1969.

Playing with spaces is actually what LamuniÃ¨re was looking for with the selection of 56 'king size' pieces that this year are part of Art Unlimited. The Swiss curator, who has been leading this section of the fair for the last 11 years, says that in this edition he wanted to reflect on the angles, volumes, dimensions and lines that spaces occupy.

"Space influences vision, and vision influences space," he says. By integrating the visitors in the projects, they are able to reflect and question their own space.

Alicia Framis also talks about space in her video installation, just a different kind. 'Lost Astronaut' (2009) offers an ironical discussion on the possibilities of travelling and living on the moon, even though she -main character of her own video- does it dressed in a vintage astronaut dress wandering on the streets of New York.

Whereas this year there are less video installations in the gallery section of Art Basel, almost half of those exhibited in Art Unlimited are some sort of film. "This trend is unstoppable, it is part of what artists to nowadays," says Lamunière, who points out that gallerists would prefer that only painting existed because it is much easier for them to exhibit.