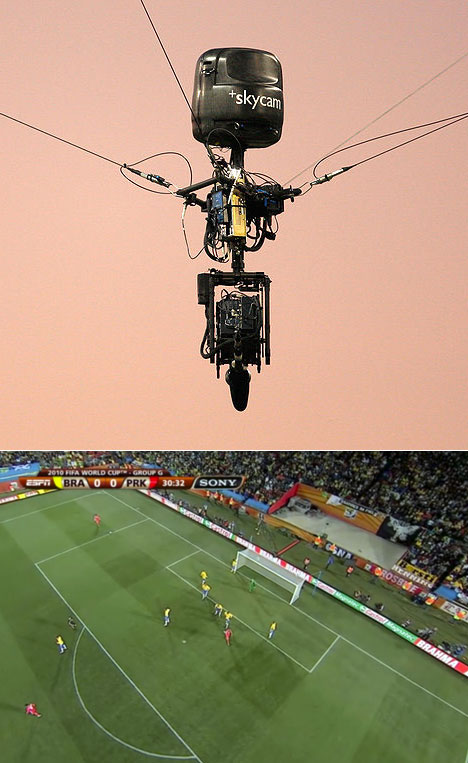 The overhead Skycam is a technology widely used in sporting events, and the first time I saw one of the dizzying overhead angles capturing an American football game, I assumed they used something like a scaled-up version of the ceiling track systems used by high-end photography studios (examples below). I marveled at the imagined size of the unseen girders that would be necessary. 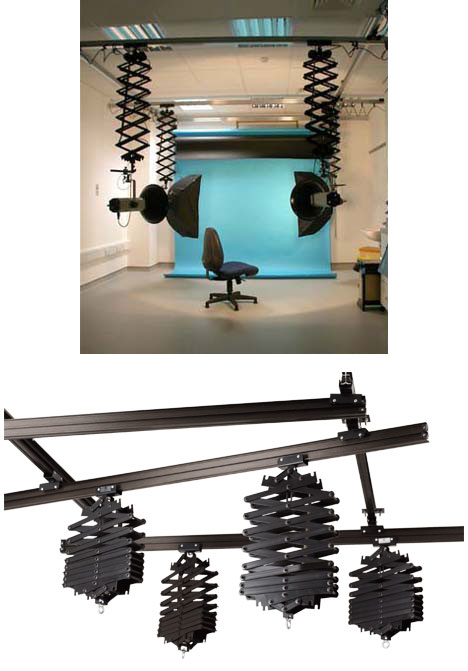 Turns out I was completely wrong, of course. Skycam works via a far more clever system.

Four tower supports are erected at the four corners of the sports venue. Connected to each of these towers is a powerful CNC winch, each in turn connected to a cable that stretches out to the center of the field. The four cables meet and connect at the camera, which weighs in the neighborhood of just 30 pounds. The cables stretching from the tower tops to the camera are not pulled horizontally taut; the camera hangs down, with the cables heading up and away from it at an angle. Additionally, each cable features an integrated fiber-optic cable which carries the camera's HD signal back to a control room.

By simultaneously spooling and unspooling each of the four cables simultaneously, the camera pilot can get motion in any direction on all three axes, at speeds of up to 30 miles per hour. The CNC does the math; the pilot, working in a control room, sets the boundaries the camera can move within (thus keeping it out of the ball's way during certain plays where it's likely to pop up, for instance) and guides the motion. A second person acts as the camera operator, aiming the lense and controlling the zoom so the pilot can concentrate on flying.

Skycam is perfect for events like mixed martial arts, where space is tight but the cameraman cannot enter the ring, and offers an unparalleled level of immersion for running sports--with American-style football it can follow the players down the field, and in baseball it can follow players as they round the bases. Skycam use in the World Cup has been far more sparing, presumably because the unpredictable direction-changes and flight arcs of a soccer ball mean the camera must be safely out of the way; you mostly see it in use during set pieces, behind the action.

The younger among you will mistakenly assume the Skycam was invented after someone took note of the immersive angles offered by Xbox and PlayStation games; but the Skycam was actually invented way back in the '80s, which I'll get to in the next entry. Stay tuned.