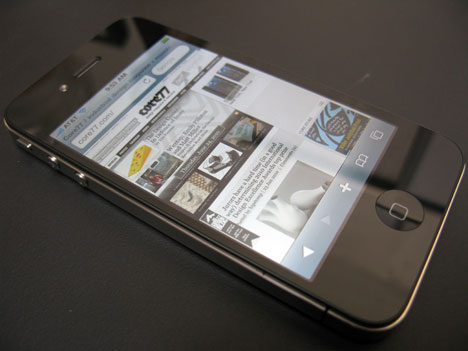 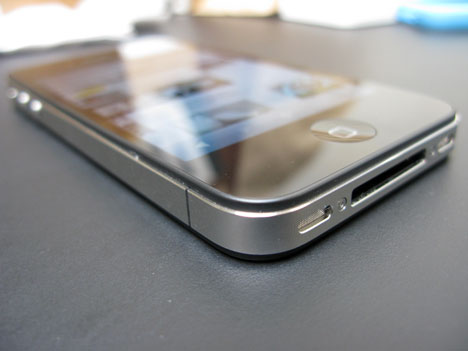 Years ago I was employed as an urban dating columnist. (What can I say, it was the dot-com boom.) For one installment I took a NYC-based dating workshop called the RelationShop. Internet dating was just picking up at the time, and the workshop instructor/relationship guru gave us all this piece of advice for navigating dating websites: "Don't put up an overly flattering picture of yourself," he warned. "If you do, your blind date will have that image of you in their head; and when they arrive to the first date and find you don't look as advertised, their initial reaction is disappointment. And disappointment is the worst possible way to start a date, never mind a relationship."

I'm here to tell you the new iPhone 4 is the opposite of a so-so date with an amazing picture. Photographs simply do not do this thing justice. And I'm not talking about the leaked Gizmodo shots, I mean Apple's highest-quality PR hero shots. They make the thing look decent, but when you see it in person, in 3D, and hold it in your hands, you cannot help but be in absolute awe of the styling, build quality, and fine detailing.

The stainless steel band that runs around the phone, the ridiculously tight fit-and-finish of the Micro SIM card cover (the tolerance looks to be in microns), the fine grill covering the earpiece and speakers that looks like it's made with nanotechnology, the subtle, circular bezel around the front-facing camera--these are all details that say the designer or design team gives a damn. They give a serious damn. To a regular consumer this looks like an elegant device. To an industrial designer this looks like Saturdays at work, missed birthdays, and going home late at night but then turning your car around in the parking lot and heading back into the office because you had another idea. Someone or some team slaved over this thing and it shows.

One example of the detailing I was struck by is the edges. Seen in profile, the stainless band is not the same width as the phone; it's slightly narrower. And seen in front view, the glass is slightly narrower all around than the stainless band. So what you have running around both the front and back edges of the phone is a little step, if you can imagine the cross-section, the cavity between two corners. Whether by design or accident--I'm going to guess it's the former--this circumferential void provides a modicum of grip. Your finger hits, on a micro level, two edges rather than one and registers the phone in your hand. Both stainless steel and glass are inherently slippery materials, and if the corners met perfectly, picking the phone up would be difficult. The stepped edges ameliorate this. 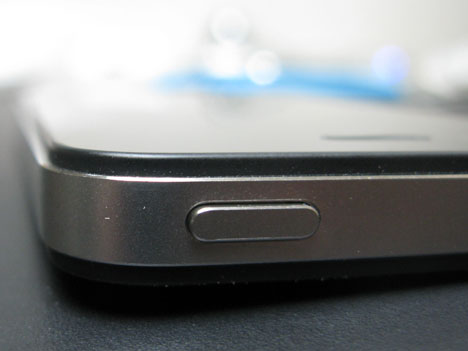 If that's not enough grip for you, Apple also offers a "Bumper," a rubber/plastic edge that goes around the edges. One nice detail about the bumper is that it has integrated silver metal-look buttons that go over the phone's volume and on/off buttons. Overall the bumper provides greater grip and is easy to pop on, but I dislike it for several reasons: One, it covers up the stainless steel band, which I like to see; two, it recesses the "mute" button so far that you can only manipulate it by concentrating and using your fingernail; and three, perhaps most bewilderingly, the iPhone does not fit in the (new for iPhone 4) dock with the bumper on! The design detail lavished on the iPhone itself does not appear to have been evenly distributed to the Bumper. 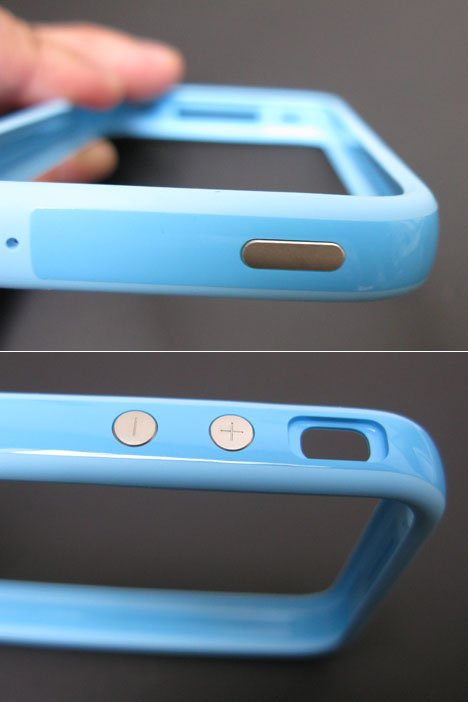 Same goes for the new dock, which is smaller than the old but has the same ergonomic problem: Removing the iPhone from its dock is impossible to do one-handed. The dock sticks to the phone, so one hand must grab the phone while the other reaches behind it to press the back of the dock against the desk while you lift it. I don't think I've ever read another reviewer mention this, and I'm prepared to be criticized as being the only person this bothers; but I bring it up because I see Apple as a company that considers every element of the entire user experience, and I find it curious that the docking experience is not as considered as all of the other things they do.

Now, back to the phone itself. After reading some technical arguments online about the Retina Display, I was prepared for it to be underwhelming. My fears were unfounded. The Retina Display is an order of magnitude better than the older iPhone's display. I never thought the old iPhone screen was bad, it's just that the RD is so much freakin' crisper, in everything from little tiny thumbnails to full-screen photos, that the side-by-side difference is nothing short of astonishing. I know that sounds like hyperbole, but folks, you have to see it for yourself--I tried photographing old-vs.-new-side-by-side but I don't have a camera with a good enough lense to make out the fine detail. Colors have more pop, edges have more definition, and in comparison, perfectly in-focus photos I had on the old iPhone look blurry and out of focus compared to the way they look on the iPhone 4.

This also goes for reading webpages in Safari. When viewing fine text, at points it's difficult to believe, aside from the luminance, that what you're looking at is electronic and not printed on paper. The crispness you've read about has not been exaggerated.

In terms of speed, the iPhone 4 is noticeably much faster. Push a button and you get the response instantly. This was most noticeable when I was taking side-by-side photos with the old and new iPhones (it should be noted, though, that my older model is a 3G); hit the shutter on the old one and there's some lag. Hit the new one and it's lightning-quick.

Here are some old-vs.-new iPhone camera photos (older up top) of this morning's line at the Apple Store next to the Core77 offices: 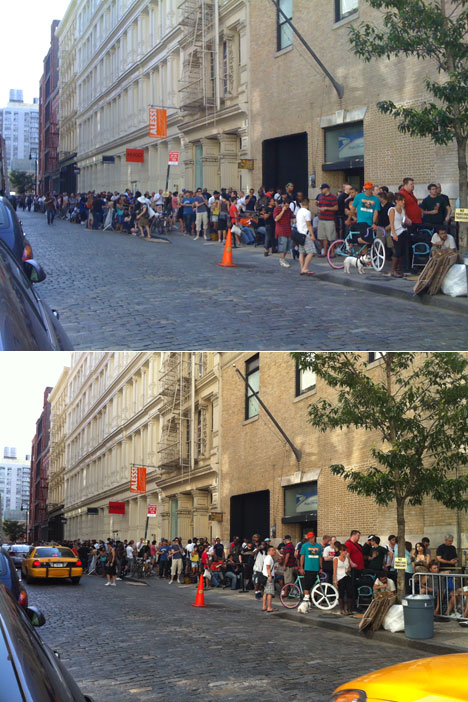 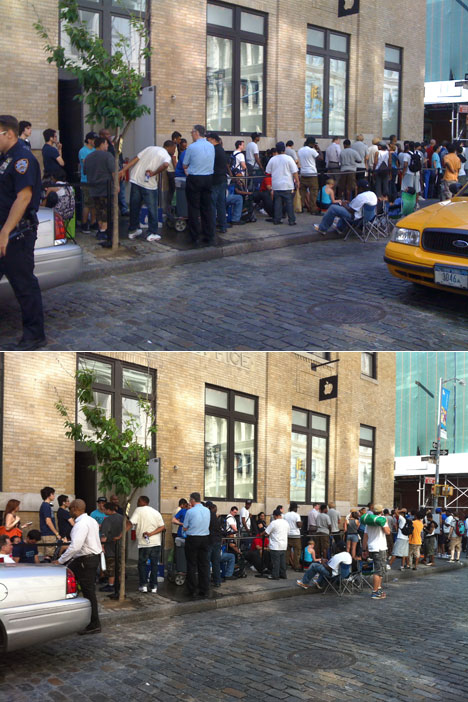 Later I'll try shooting some video to show you.

Well folks, this was just a first-impressions post as I've only had the phone for a few hours. I haven't had a chance to try the Facetime feature yet, as I've got to find someone else who's got an iPhone 4. I guess I could use the front-facing camera to do something else, like...take a photo of myself for a dating website. Just gotta make sure I catch the least flattering angle.