To Change Hearts and Minds...Change Their Chair! 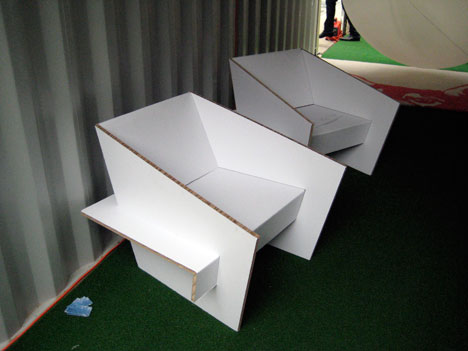 If you want to convince someone about something, you'd better give them a soft seat.

This is one design implication coming out of a surprising new set of studies that examines the relationship between our sense of touch and our attitudes and decisions. The studies looked at the unconscious associations between aesthetic elements such as texture, hardness, and weight, and found that by exposing subjects to these elements, researchers could elicit different responses to the same social questions and tests.

For example, study participants who sat in a soft seat and were asked to negotiate with a car dealer made far more generous second offers than those who sat in hard seats. The hard seats literally made them more rigid. Similarly, when volunteers were asked to read and evaluate a story about an interaction between a supervisor and an employee, the ones in the hard wooden chairs viewed the boss as stricter and more rigid than the ones who sat in soft, cushioned chairs. In another experiment, participants who had just put together a puzzle with pieces coated in rough sandpaper were more likely to find a story of an ambiguous social interaction to be difficult and adversarial than those who had put together a puzzle made of smooth, varnished pieces. Harsh textures evidently prime us to think harshly. Other related studies have shown correlations between temperature and social attitudes (proving the intrinsic truth behind the phrases "warm fuzzies" and "cold pricklies"), between weight and perceived seriousness, and between "clean smells" and moral behavior. These studies are part of an emerging field of study in psychology known as embodied cognition, which is revealing just how much the logic of the mind is shaped by the unconscious perceptions of the body, and creating fascinating new avenues of exploration for designers in the process.

The observed effects shouldn't surprise designers -- we, the evangelists of aesthetic value, whose livelihoods often rest on convincing others of the significance of choices about color, material, and surface finish. Countless times, we have faced a doubting audience and asserted with earnest conviction that these things matter, not just because they're pretty, but because they have real impacts on people's lives.

These studies shouldn't surprise us, and yet they do. I think it's because they reveal the process behind that translation from aesthetic execution to emotion and belief to be more obvious and banal than we could ever have imagined. Warm things make us socially "warmer" and heavy things make us take issues more seriously -- really? What's next? Green things make us green with envy? Light things make us delighted? (Actually, there's no proof yet, but I think there might be something to that last one.) There's an almost comic lack of elegance in a mind that literal. Reading about this research is like a "Wizard of Oz" moment, an unveiling of a simpleton at the controls that gives the lie to our belief in our own complexity. But while surprising, this knowledge is also quite exciting, for it suggests that the unconscious mind that is so stubbornly intransigent in the face of logical arguments might be wholly susceptible to a little pressure from a cashmere scarf, a cup of hot coffee, or a nice scented candle. In the brain, it's the sensualist downstairs who quietly runs the show -- good news for designers, who are already adept at speaking this language.

There's great power in these revelations, and also great responsibility. By learning from these new psychological insights, we have an opportunity to be far more precise and effective in our practice of design. By teaming up with scientists, we could go even further, possibly gaining real, evidence-supported answers to design questions we have previously addressed through educated guesswork and trial and error. Could we design environments that increase people's feelings of communal responsibility? Could we design tools that increase worker conscientiousness and minimize accidents, just by the way they look or feel? Could we really design a chair that would make participants in a negotiation more agreeable and willing to compromise? (And could we get some of those installed in Congress, stat?) A collaboration between design and psychology could offer clear aesthetic guidance on a range of design challenges and create a new role for aesthetic problem-solving on weighty issues. Far from being dismissed as cosmetic "styling," aesthetics could become a serious and essential tool for shaping behavior and social interactions.

But if this window into the workings of aesthetics on the brain creates new opportunities for design to contribute to our general wellbeing, it also places a burden on designers to be more conscientious about how we apply this knowledge. When science can demonstrate the results of our decisions, we can no longer make up the rules. In the same way we have to be aware of the physical effects of our design decisions -- safety, comfort, and ergonomics -- in the future I think we may also be held accountable for their mental and emotional effects as well. As much as our increasing understanding of design and the mind makes it easier to design well, it also makes it much more obvious when we have done it badly.

It's early days for scientific developments like embodied cognition. There's still a lot to be learned about how these processes work within the brain to affect our thinking in such subtle yet profound ways. But the pace of research into the psychology and neuroscience of emotion, reward, and decision-making is lightning fast at the moment,* and I think designers would be wise to keep an eye on the new discoveries. What it means to be human in a world of designed objects is changing. It's changing because of social forces, economic realities, and environmental limits. But it's also changing because what we know about ourselves is changing. As we gain glimpses into the mysterious workings of the mind, we may see a host of new roles for design, and a vastly expanded toolbox for designers to work with in shaping the world to foster happier and healthier lives.

To read the most recent set of studies, see here, and a deeper analysis by science writer Ed Yong here.

*As evidence, check out these charts of "The Season's Hottest Brain Regions," which shows that research into brain areas related to these psychological processes, such as the orbitofrontal cortex, cingulate, and amygdala, has rapidly accelerated over the past few years.

To Change Hearts and Minds...Change Their Chair!

Ingrid Fetell is a designer, researcher, and writer whose work explores the emotional relationships between people and things. She writes the blog Aesthetics of Joy, and is working on a book of the same name, which draws on insights from neuroscience and psychology to suggest ways that design can lead the way to happier, healthier, and more sustainable lives. This allows her indulge her twin passions for delightfully designed objects and jargon-filled scientific studies. She also writes the Design and the Mind blog on the Psychology Today website.