Damon Millar is developing a new way to think about CAD. Instead of using abstract, geometric modeling tools to create a form to be output by highly flexible, axis-based, CNC tools, PhysicalCAD invites the user to manipulate blanks of material with virtual tools like lathes, chisels and drills to create form. This would then generate a set of instructions for how to make it, by hand, with the very same tools. The material blanks are intelligent, embedded with information about intrinsic properties like grain, hardness, and density.

The tool is at an early stage, but don't let the low-fidelity distract you—the possibilities of this concept are endless. See a demo in the video above. How many times have you wished you could just chisel a chunk out of a meticulously built volume, only to be thwarted by clouds of control points?

We wondered why anyone would use CAD at all if they were interested in exploring form with hand tools. Is Physical CAD just a glorified, computerized, but less capable version of what designers do every day, by hand, in their shops? What does it mean to add this additional level of removal, simulating the behavior of tools and raw materials? 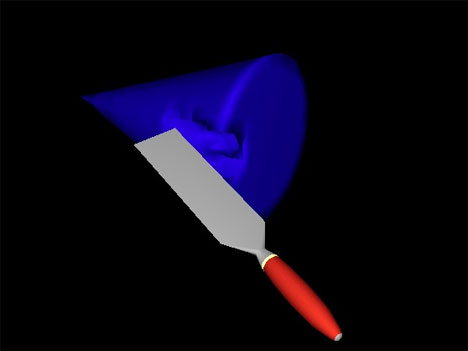 A true solid modelling system would model more than the surface, it would model the material inside. But the material inside is only important when things deform, in response to a force. So a true solid modelling system uses force to shape things, not geometric modelling tools. This is handy, because real tools also use force. Suddenly we have a more intuitive and acessible way to use higher-fidelity CAD. In this new world of modelled materials, real material knowledge becomes important for using CAD. Physical CAD enables expert makers to contribute their knowledge by using machinery as CAD modelling tools. Physical CAD enables sympathetic decisions about shape and materials.

We love the questions this project opens up. What happens when digital form making becomes more intuitive? Bringing it closer to hand-working and opening the doors to a different kind of mass production, informed by the set of instructions such a CAD modeling tool would produce. As Damon says, it's a way to "enable sympathetic decisions," inviting CAD users to manipulate form aggressively and immediately, like a video game about making something.

Let us know what you think in the comments.