When I used to take roadtrips with friends, there was a simple rule: Guy sitting in the driver's seat drives, guy in the shotgun seat navigates. Most of the time it worked out well, but I feel like every group has that one guy who can't read maps to save his life, who thinks you're going east while driving into the setting sun, who gets you all stuck at some truck stop in the middle of nowhere two hours off-course.

Anyways when I saw the following image, I thought it'd be a great passive-agressive way to trick your car out while Mr. Map-Challenged is in the truck stop bathroom: 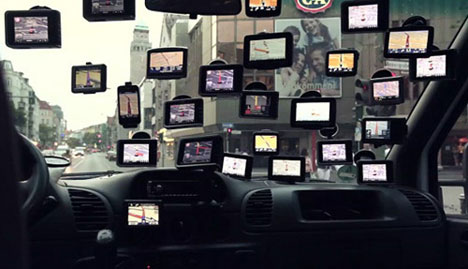 That's the work of Berlin-based artist Garvin (too bad it's not "Garmin") Nolte, who's titled the project "Crossroads (what to do)." The attendant video's nine minutes and change, but Nolte's project description is way brief:

The video installation "crossroads (what to do)" deals with the influence of others onto one's own path of life in an abstract way.

crossroads (what to do) from Garvin Nolte on Vimeo.