A company called IndexSAR, which specializes in testing out wireless systems, needed a model of a human hand to stick a cell phone into. For the purposes of their testing parameters, it was determined that the hand model needed to be made out of carbon black, a material that absorbs radio waves put out by cell phones. 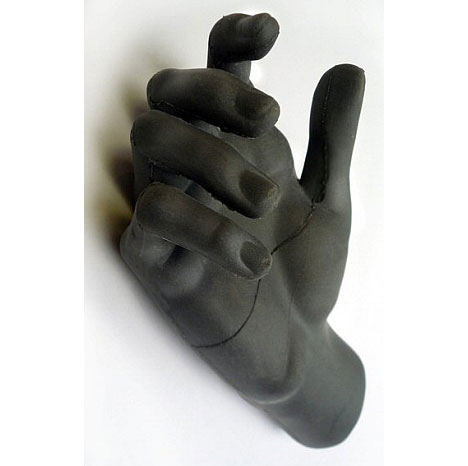 The problem with this, as described by Vince O'Horo, Director of Industrial Design Consultancy's modelmaking branch: "Carbon black is a difficult substance to work with. The ratio of carbon to polymer needed to be exactly right in order to distribute the carbon evenly throughout the phantom hand. Often the carbon powder becomes very thick when mixed, making it difficult to manipulate and creating air pockets within the mould. We had to work quickly and accurately, employing a moulding technique customised for this particular job."

When O'Horo says "quickly" he means rapidly, as in Rapid Prototyping. Using a combination of stereolithographic mold-making, pressure casting and vacuum casting, IDC Models' team was able to mold a hand with the appropriate materials, and even incorporated polyurethane elastomer into the fingers so they could flex around different-sized phones.

There are some more details (vague ones, of course, for proprietary reasons) at the PRW source article.