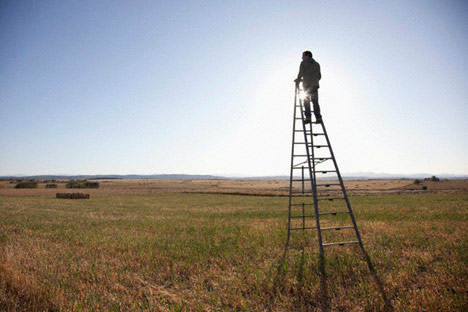 Inspiration's a tricky thing; some artists pathologically avoid gazing at the work of others in order to guarantee their work's originality, while others assiduously mine the canons of history to ensure that their art bears the proper influences. In the corporate world, however, the battle between "eureka" moments and synergistic understanding has already been decided. While fine artists, fiction authors and the occasional mad-scientist can work in isolation, those endeavoring to create functional products are rarely afforded that luxury.

Instead, as the history of invention illustrates, the modern creative process relies more on incremental improvements rather than transcendent "aha" moments. Perhaps it's finally time to discard the myth of the lone-inventor. While personal experience may occasionally lead to moments of inspiration, even the story of Archimedes's realization of displacement may be apocryphal. Even paradigm changing ideas like calculus and evolution share multiple authors. Given the number of parallel inventions throughout history, it's reasonable to conclude that such innovation stemmed not from some quasi-mystical firing of neurons in the brain of an anointed inventor, but instead grew as the logical consequence of the progression of other threads of human knowledge, newly applied to a fresh field.

While inspiration may come from the immediate environment or occasionally from within, with billions of people on the planet sharing broadly similar experiences, the likelihood that one misunderstood genius will have a unique and paradigm changing experience independent of shared knowledge decreases with every year and every birth. Instead, most human lives are defined now as much by their interaction with products of human ingenuity as they are by interaction with the natural world. Individually, while being told that one can't be the next Newton or Leibniz might be a touch soul crushing, our modern world (including the screen through which you read this) affords interconnectivity and even interpersonal-connectedness never dreamed of by Newton. He had to perform needle experiments with his own eyes to learn about optics, as he had no peers, but a modern youth can find inspiration in a global community rather than a local one. As observers and participants in the creation of design history, we at Core77 continually find ourselves inspired by the beauty created by strangers and friends alike. Although we can't help but utter a few "why didn't we think of that's," the thrill of seeing innovation by others only spurs us to work harder at our own projects, and smile that we aren't going at it alone.