Impressing creativity upon your kids: Heather Swain's "Make These Toys" 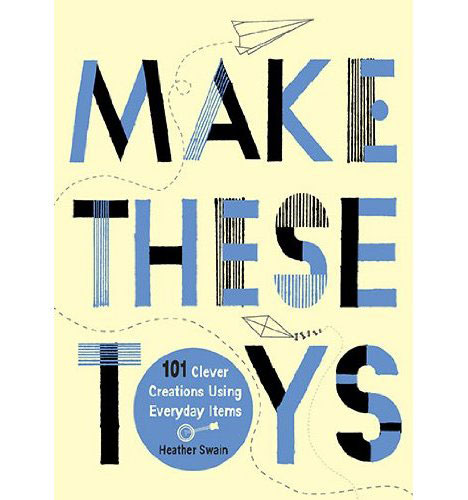 I had a friend who was a caretaker for an extremely wealthy family in Westchester, New York. The family had been rich for generations, and everything they owned was "the best" and was brand-new. One of my friends' tasks was keeping the family's considerable fleet of cars filled with gas, and one day when he was returning with the family SUV, he carelessly let a tree branch on the estate gouge the paint on one side. When he confessed his crime to the family patriarch, he couldn't have been more surprised at the response: "Oh," said Rich Dad, "that's too bad. I guess we better get a new one."

"Uh...what?" my friend said. The truck was less than a year old.

In short, the patriarch had been raised the same way he was raising his kids--to believe that only new, pristine things were good, and when you needed something, you went out and bought it.

In contrast, I remember Karim Rashid recounting that his father was a set designer who had built many of the things in Karim's childhood home. He had thus had impressed upon him from a young age that if you wanted or needed something, you designed and built it. (The philosophy's certainly served him well, as the man has something like 3,000 designs in production.)

Obviously these are not binary choices in how to raise children, but if I had kids I'd certainly lean towards the latter philosophy rather than the former, and not just out of my eternal indigence.

Kids who spend hours communing with technology -- plugged into televisions, computers and iPods -- may benefit from some good, old-fashioned arts and crafts fun. Especially if they can then play with what they make.

..."The process of picking out the project, getting stuff together and making it" is only half of it, she says. "Then they go play with it. It's not over. That's what I like."

...The toys aren't intended to last forever. After all, they're made from cardboard tubes and glue.

"It's going to break. It's going to go away," Swain says. "But they can make it again. They can change it and innovate."

Amen to that. If my kid scratches the family car, I won't learn about it because he told me to get a new one; he'll just show up to the dinner table with paint under his fingernails and a respirator-impression on his face.