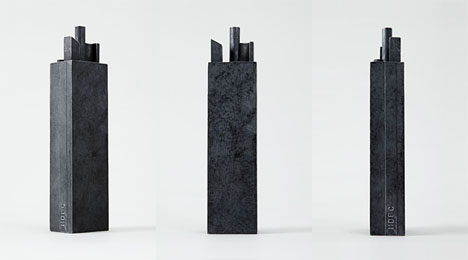 Record label Ghostly will debut it's new label release format, the Totem, with the release of Matthew Dear's upcoming album Black City. More than a symbol or souvenir, these totems are an experiment in digital music delivery. providing a physical key to virtual content. Each one will be embossed with a unique four-character suffix that will allow visitors to access a private page on the internet, from where they can stream the album in entirety or download it. The Black City Totem was designed by the Boym Partners, who have created an abstract, indecipherable object emblematic of the album's sensibility. A video of totem production set to a Matthew Dear track can be seen below.

The MDBC Totem is both a sculptural representation of the themes explored in Black City and a symbolic conduit to the music itself. Vaguely reminiscent of one of the soot-blackened skyscrapers that might populate Dear's creeping, nameless city, the stacks upon the totem also call to mind the many shaped prongs of a universal power adaptor. In this sense, the totem is not simply a miniature building, but an abstract key to an unknown door. The branding of the totem has been purposefully reduced to its bare essentials—only the letters MDBC and unique three-digit suffixes are included—so that the totem's meaning remains discernible only to its beholder.

We love the idea of a small village (or large city) of totems on a shelf or table, each one holding a digital key to a different piece of music. Already can't wait to see the next ones.

The totems come in a limited edition of 100 (and an exclusive track). The objects will be available from August 3rd until they run out at The Ghostly Store.